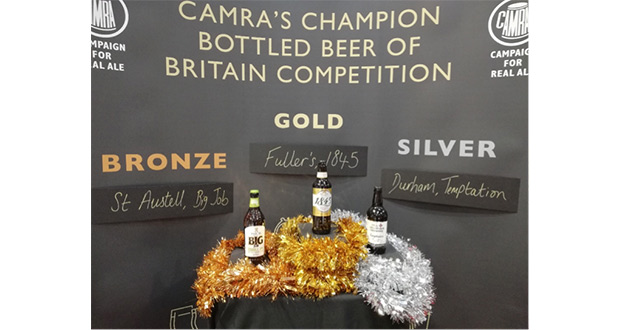 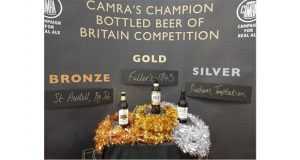 Fuller’s 1845 has been crowned the Champion Bottled Beer of Britain in CAMRA’s prestigious annual award, recognising the best bottle-conditioned real ale in the country.

The 6.3% strong ale was described by judges as rich and fruity, matured to perfection and easy drinking.

Runners up include Temptation Imperial by Durham Brewery which took home Silver, and Big Job by St Austell which won Bronze.

Fuller’s Head Brewer, Georgina Young, said: “This beer was the brainchild of our former head brewer, the great Reg Drury, to celebrate 150 years of brewing at Fuller’s – so I’m delighted that it is still as popular as ever 23 years later. It was also the beer that caused amber malt to be reintroduced to British brewing – a malt that is now widely used in a large number of beers.

“Winning the Champion Bottled Beer of Britain award is a real honour – I think we will be celebrating at Chiswick by drinking a few bottles.”

The judging and announcement took place at the BBC Good Food Show at the Birmingham NEC, following a series of local member voting rounds and regional judging competitions throughout the year.

Gillian Hough of CAMRA’s National Executive, who made the announcement, said: “The Champion Bottled Beer of Britain competition is a national celebration of bottle-conditioned real ale, and is the culmination of hard work by local brewery teams from across the country, and CAMRA members who select and judge the beers regionally.

“The announcement of the winner could not be made at a better place – the BBC Good Food Show is the epitome of all things good in the food and drink industry, and it’s a privilege to be here.

Visitors to the BBC Good Food Show will now have the opportunity to taste a selection of the finalists at a number of tutored beer tasting events run by Roger Protz, Adrian Tierney-Jones and Annabel Smith, as part of the Great British Beer Experience.