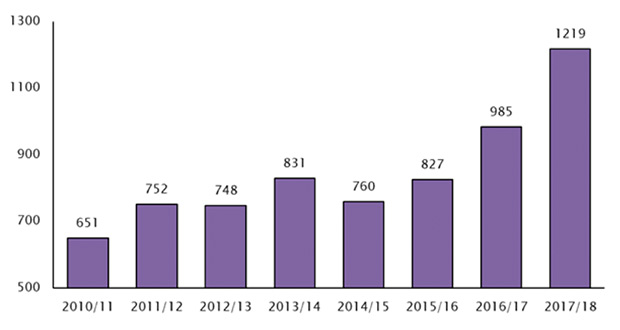 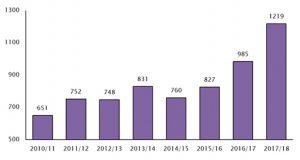 The number of restaurants going insolvent has breached 1,000 in a year for the first time since the figures were first tracked in 2010, jumping 24% to 1,219 in the year. Up from 985 says Moore Stephens, the Top 10 accountancy firm.

Moore Stephens says the jump in insolvencies comes as the restaurant industry grapples with overcapacity.

An influx of private equity investment into the restaurant businesses has led to some chains opening too many sites which are failing to break even.

Some restaurant chains are going through the Company Voluntary Arrangements (CVA) process to close many of their unprofitable branches. For example, Gourmet Burger Kitchen entered a CVA in October 2018 and is set to close 17 restaurants.

Moore Stephens adds that recent interest rate rises and concerns over Brexit have put a dent in the growth of consumer spending, with consumers eating out less. Annual growth in household spending slowed to 1.6% in the second quarter of 2018, down from 3% in the same period in 2017.**

Jeremy Willmont, Head of Restructuring & Insolvency at Moore Stephens, says: “Closures in the restaurant sector are at epidemic levels now. The impact is visible on almost every high street of a major town or city.

“Restaurants have always been prone to high failure rates but vacant restaurants used to be rapidly replaced by a new contender. For now, that process seemed to have stalled and many sites are empty.

“In the wake of Brexit uncertainty and interest rate rises, it seems consumers are tightening their belts and discretionary spending is the first thing to go.

“Under such tough trading conditions, restaurants should be cautious about building up debt. They can very quickly become overextended as costs continue to rise.”

Moore Stephens adds that slowing consumer spending comes on top of a number of other financial pressures. Restaurants with tighter profit margins, in particular, could still be struggling to cope with employment costs such as rising minimum wages and the apprenticeship levy as well as increased input costs (food and beverage) caused by a weak