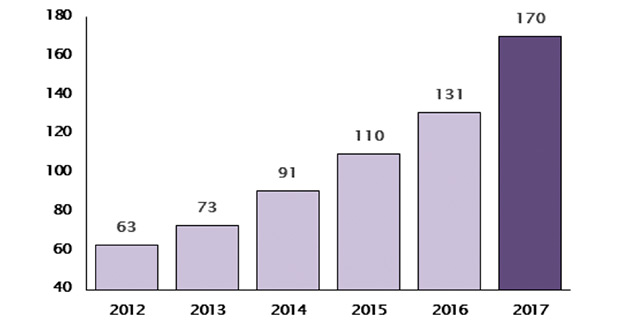 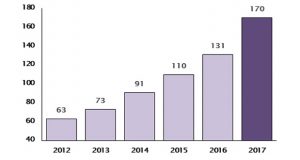 UHY Hacker Young explains that entrepreneurs are looking to capitalize on the increasing consumer demand for craft spirits. Spirts of unusual and innovative flavours have grown in popularity, particularly among young consumers, as has preference to ‘buy-locally’ from smaller, urban breweries and distilleries.Smaller, independent alcohol brands that have generated high sales growth and achieved premium pricing have become attractive M&A targets for larger companies. New entrants to the sector looking to imitate the successful exits achieved by other brands.

Many drinks giants are now increasingly willing to pay high prices to acquire independent brands with examples of recent M&A deals for distillers including:

Following the rise of niche, urban gins, there has been a similar surge in popularity for craft rum. Rum sales in the UK hit £1billion in 2017, up from £960million in 2016*, giving rise to claims that we are on the cusp of a ‘Rumnaissance’.

Consumer demand for craft rum has led to a growth in the number of UK rum brands, such as the English Spirit Distillery’s Old Salt Rum, and Spirit Masters’ Glorious Revolution White Rum.

James Simmonds, Partner at UHY Hacker Young, says: “The UK spirits industry is currently in growth mode and shows no signs of slowing, as illustrated by the increase in new distillery businesses”.

“As the public demand for artisan drinks and craft drinks continues, many pubs that previously stocked only one brand of each spirit are now giving customers a variety to choose from”.

“Craft spirits are considered a luxury item that many customers are now willing to pay a premium for. This allows boutique brands to sell at higher margins and generate large returns”.

“The growth of the UK spirits industry looks to continue into 2018 as consumer demand for premium priced spirits, an increase in M&A activity, and the rising number of distillery businesses shows no signs of slowing.”