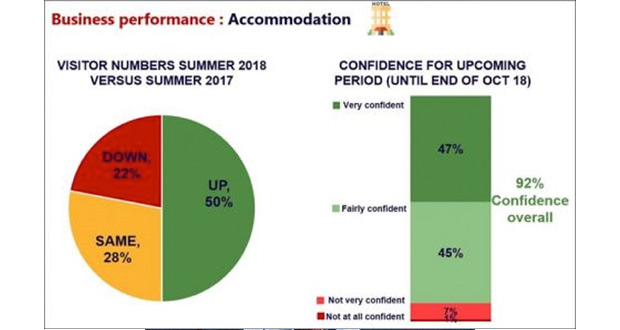 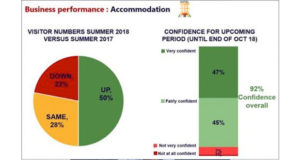 Out of 300 accommodation providers surveyed for VisitEngland’s ‘Tourism Business Performance and Confidence Monitor’, half stated that their visitor numbers from mid-July to the end of August were up when compared to the same period in 2017.

The research also asked about the expected performance of those accommodation businesses surveyed from the end of the summer holidays until the end of October this year. It showed that 92% said they were confident about their business performance during the stated timeframe. Sixty-seven per cent also reported good or very good advance booking levels until the end of next month. Findings from the research showed that the increase in bookings during the summer holiday period came from both domestic and overseas visitors.

Looking out to the rest of 2018, more than half of the accommodation providers surveyed, 52%, expected their performance to be better than in 2017.

“It is encouraging to see that accommodation providers and visitor attractions have experienced a strong summer with bookings up on last year and confidence sustained beyond the peak season. These results are testament to the quality and range of experiences on offer year-round across England.”

The survey also asked 250 visitor attractions in England about their performance during the summer which showed that more than half, 54%, said that visitor numbers were up compared to the previous year.

This evidence of a strong summer follows VisitEngland’s Trip-Tracker survey which showed that 7.3 million Brits were planning an overnight holiday in the UK during the August bank holiday week-end, bringing an estimated £1.75 billion boost to the economy.

From January to May this year Brits took 16.2 million holiday trips in England, on par with the previous record set in 2009.