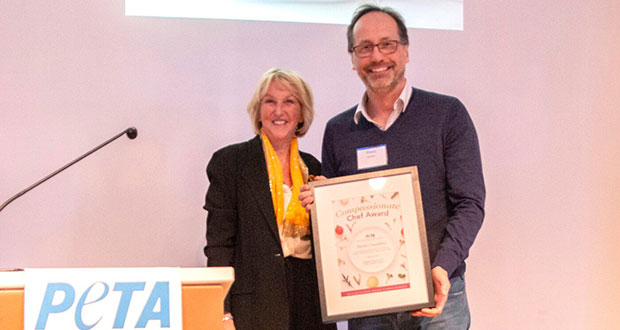 Michelin-star restaurateur and MasterChef guest judge Alexis Gauthier added another notch to his belt on Sunday when he was presented with PETA’s Compassionate Chef Award during a “We Are All Animals” presentation in London by PETA founder Ingrid Newkirk.

In 2015, Gauthier made the compassionate decision to ban foie gras from his London hotspot, Gauthier Soho, because of the cruelty involved in its production. And when PETA approached him about offering a World Vegan Month menu later that year, he readily agreed. It was such a huge success that it quickly replaced the restaurant’s vegetarian menu.

Gauthier has now gone vegan himself and has become the go-to expert on vegan cuisine. He recently appeared on the BBC’s MasterChef and challenged the contestants to prepare a knockout vegan dish, telling them, “This is the future of food.” In partnership with PETA, he also devised a luscious vegan faux gras, with all the flavour of the original French dish but “[w]ithout the suffering, torture and death that usually goes with it!”

The majority of Gauthier Soho’s menu is now plant-based, and the restaurant is making the transition to being 100 per cent vegan. It also provided the prizes for PETA’s 2017 UK and Ireland’s Hottest Vegan Competition, giving both of the lucky winners a voucher for an eight-course plant-based tasting menu for two.

In accepting his Compassionate Chef Award, Gauthier said of his decision to spare animals, “I realised that the piece of meat in my hand was once connected to the beating heart of an animal who wanted to live.”