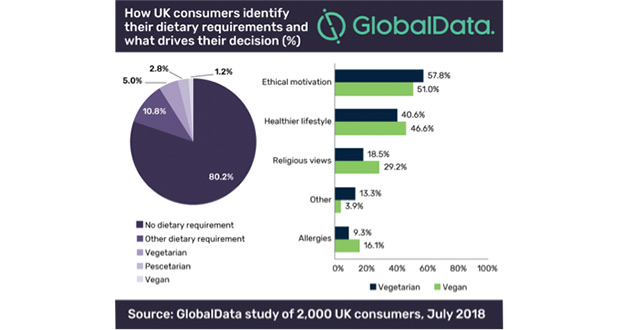 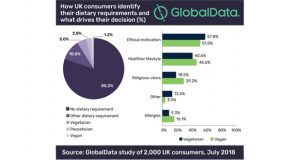 Veganism continues to grow rapidly in popularity in the UK, partly due to the high quality plant food now available in mainstream grocers. As of 2018, 42% of reported UK vegans have followed the diet for less than a year; this compares with only one fifth of vegetarians (most have been vegetarian far longer), according to GlobalData, a leading data and analytics company.

According to GlobalData’s recent survey, 51% of UK consumers say their primary motivation behind adopting a vegan diet is for ethical reasons, closely followed by 47% of consumers wanting to lead a healthier lifestyle.

The vast majority of consumers agree that grocers meet their dietary needs, with almost 90% of UK vegetarians finding what they want at the supermarket and 79% of vegans.

Stella continues, “How grocers manage product placement instore is also important; the founder of Beyond Meat, Ethan Brown, stipulates that their products must be located in the meat aisles, alongside other points in stores, as too many potential shoppers – many of whom may be meat eaters – are otherwise lost.

“Price is also a concern; at Tesco, a pack of two Beyond Burgers is sold at £5.50, which is prohibitively high when the cost of two beef burger patties are almost half that. However, as the supply of meat substitutes becomes more plentiful, the price should also drop.”