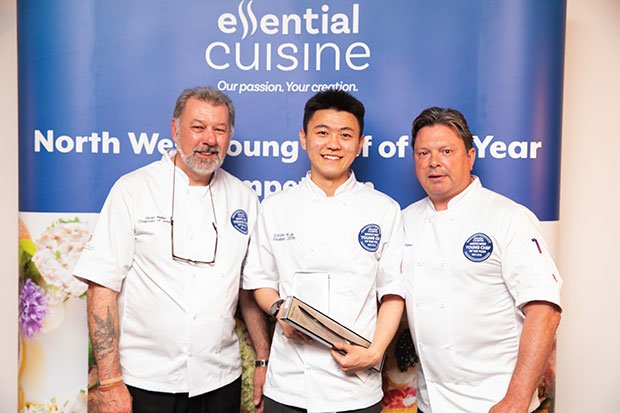 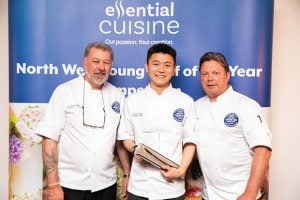 A 21-year-old Senior Chef de Partie from The Art School, Liverpool has been crowned as the best young chef in the region, cooking his way to the coveted title of North West Young Chef of the Year 2019.

Edwin Kuk has been described by judges as having a phenomenal work ethic and was praised for having set himself a huge challenge to execute detailed dishes containing numerous components.

Edwin won judges over with a mix of skill and calmness under pressure to see off the advances of five other highly touted young chefs in a tense final held yesterday at Cheshire College – South and West.

Jan Vrancken, 21 of The Cartford Inn, Preston was awarded runner-up.

On the win Edwin said: “Words can’t explain it – I’m so happy, I’ve not stopped smiling. In the semi-final, I prepared a souffle with ice-cream, but I knew it was risky – it’s a dish dependent on temperature and equipment so I changed my dessert for the final and it paid off.

I want to say thanks to my mentor Paul Askew, my colleague and fellow finalist Bethan and the whole brigade at the Art School.

Next is to win the Nationals! I have faith I can do the North West proud.”

Alongside the coveted title, Edwin scoops an automatic seed into the prestigious Young National Chef of the Year semi-final, plus £500, a weekend for two at Cheshire’s The Mere Golf Resort & Spa, and £100 Fazenda gift voucher.

Executive judge, Brian Mellor had this to say: “It’s been a tough competition, the hardest we’ve judged by far, but it was Edwin’s passion, incredible skills and perfect execution that stood out. That fierce determination and talent is incredible to witness – we can’t wait to see it again from Edwin come the national semi-finals.”