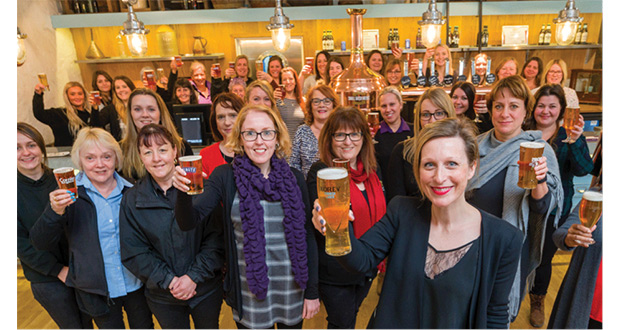 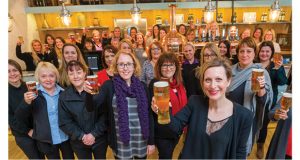 Cornish based Brewer St Austell will be celebrating International Women’s Day and paying tribute to the our women the way they know best, by raising a glass of beer on March 7th.

Traditionally some may have thought women and beer an unlikely match but, just as with the history of women and their rights and role in society even today, there’s a real need to look beyond perceptions and challenge old beliefs.

Over a hundred years ago women did not have the right to vote. Just fifty years ago a bank could refuse to issue a credit card to an unmarried woman, and even if she was married, her husband was required to be a co-signatory. Women have come a long way, but it’s often needed women with vision and awareness and a real struggle to break through age old beliefs and all-male bastions.

As far back as 1911 when the Suffragette Movement was making headlines, women have played an important role at St Austell Brewery. Hester Parnall took over the running of the Brewery – following the untimely death of her brother – from her father Walter Hicks, who set up the business in 1851. She was described by Clifford Hocking, the Brewery’s Company Secretary in 1963 as, “Ruling the Company with the grace of a duchess combined with the aplomb of a successful business man”.

Under her leadership as Chairperson the Brewery grew and by the 1920s the output was close to 38,000 barrels per annum, almost twice the amount brewed before the war. Through the difficult post-war years and economic depression of the 1930s, Hester steered the Company’s growth with an increase in the workforce, the acquisition of 72 pubs and hotels, the purchase of Christopher Ellis & Son’s Steam Brewery in Hayle with its estate of 30 pubs and the changing of the Company’s name from Walter Hicks Brewery to St Austell Brewery.

Women continue to pay a significant role with nearly 70% of the St Austell pub estate run either single-handedly by women or as part of a couple partnership. While much more needs to be done universally with encouraging women into the brewing business and appreciation of beers, the Brewery today has women who lead and support the business.

A Gender Pint Gap study into Britain’s female attitudes and behaviours towards beer conducted by Dea Latis revealed that only 17% of women drink beer at least once a week compared to 53% of men, and yet 71% of the female respondents in the 35 – 44-year-old bracket said taste was the reason they liked beer. Perhaps research conducted in February 2017 by Pioneer Brewing Company helps to explain this paradox with its statistic that 20% of the women felt uncomfortable asking for beer advice.

So what better way to celebrate than by getting women together at our Visitor Centre on March 7th at 4pm to try, taste, appreciate, talk about and rekindle beer passion with beer tasting and pairing beer with food?

Julie McFeat, our fully qualified beer sommelier who is one of just thirty-six female beer sommeliers from 10 different countries will take the attending crowd through a tutored guide to appreciate the qualities of each beer, matching them to some delicious beer-tapas prepared by the Brewery’s Training & Development Chefs Laurie Foster and Lewis Allington, along with the Brewing Experience team.