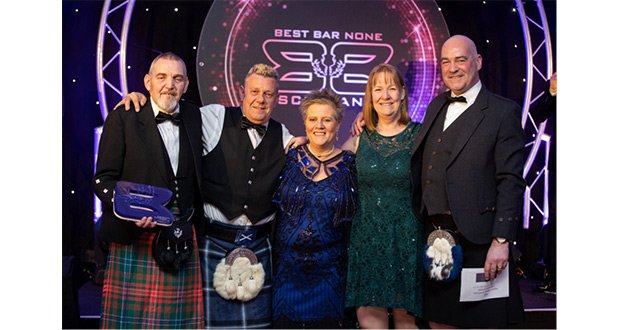 Nine Scottish venues are celebrating after being crowned as the country’s most responsible licensed premises in the prestigious Best Bar None National Awards.

The annual awards celebrate the nation’s bars, nightclubs and licensed premises who go the extra mile to promote responsible drinking and customer safety.

Heart of the Community – The Glenmavis Tavern, West Lothian

Best Bar None, which runs the popular national accreditation scheme of the same name, said it had received the highest calibre of entries yet for the awards. Winners were announced at a glittering ceremony at Doubletree by Hilton Dunblane Hydro last night (March 28th).

“Scotland’s licensed premises have excelled at the 2019 Best Bar None Awards, which is credit to their commitment to putting customer safety first. The extremely high calibre of entries for this year’s awards proves that Scotland’s licensed trade is playing a leading role in promoting safe and responsible drinking. Well done to all our winners and finalists.”

“As a sponsor of this year’s event, it’s fantastic to see so many businesses going above and beyond to promote responsible drinking and give customers a safe night out. Personal safety is something we’re committed to – Yoti gives individuals a secure way to prove their age on nights out, without having to carry around valuable ID documents, which can be easily lost or stolen. Congratulations to all of the winners who are going the extra mile to encourage customer safety.”

“We congratulate all the finalists, who have shown great commitment to making their venues safe and welcoming places that encourage responsible drinking, and where vulnerable customers are supported.”