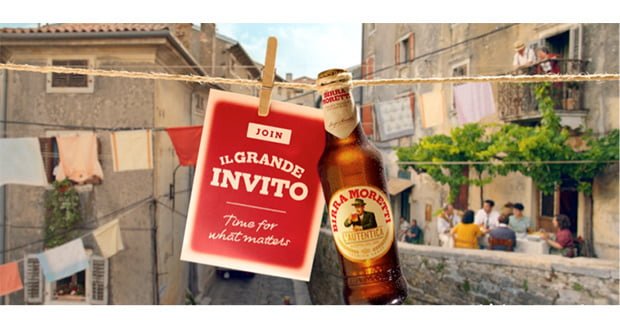 Italian lager Birra Moretti is setting its sights on bringing millions of people together this summer in an ambitious campaign that will see the launch of a TV commercial, digital, trade activation, PR and festival activation. The campaign will be the Italian lager’s biggest campaign to date and will continue to boost Birra Moretti’s position as the fastest growing beer brand in the UK.

Il Grande Invito, meaning ‘the big invitation’, will see millions of people encouraged to gather together around the table over great food and beer, to make time for what matters – family and friends.

Over the coming months, Birra Moretti will run a major TV campaign, along with in-pub and in-store activations, a major PR campaign, an extensive digital activation and a major experiential activation at one of the UK’s leading festivals, Barclaycard Presents British Summer Time at Hyde Park.

The brand’s popular TVC (re-positioned to promote Il Grande Invito) kick-starts the summer of bringing people together around the table – with continental premium lager Birra Moretti at the heart of these social occasions. The playful advert is a celebration of Birra Moretti’s authentic heritage, showcasing a family coming together around a table for lunch in a picturesque Italian town and highlighting the importance of making time for what matters, an integral part of Italian culture.

One in three on-trade occasions include some kind of food, and nearly half of all occasions see Birra Moretti consumed with food. Drinks should always match the quality of the food, so offering a mix of continental premium lager, such as Birra Moretti, is key.

Iza Glodek, Premium Brands Unit Director at HEINEKEN, says: “Birra Moretti has achieved phenomenal growth over the last five years, thanks to a relentless focus on quality, authenticity and its unique Italian credentials. The continental premium lager sector continues to be incredibly strong, with Birra Moretti leading this growth.

“Food is proven to be a fantastic way to entice customers and what’s more, it’s perfectly aligned to our beer’s traditions. Through Il Grande Invito, our mission is to bring people together around the table this summer, creating long-lasting moments centred around food, and of course with Birra Moretti at the heart of this.”

Continental premium lager has become a force to be reckoned with in recent years; the category is worth over £1.6BN to the UK on-trade and is growing at 18% in value annually.

This multi-million pound campaign will push Birra Moretti even further in the UK, where it has shown exponential growth. The campaign is estimated to reach over 43 million people, and 87% of 24-44 year olds.

The multi-media campaign was created by Birra Moretti’s creative agency St Luke’s; the TVC aired on 15th April and will roll out to VOD and social. Birra Moretti will also be launching a brand-new digital hub where consumers can find more information about Il Grande Invito. The hub launched w/c 15th April 2019 and is available at www.ilgrandeinvito.birramorreti.com.