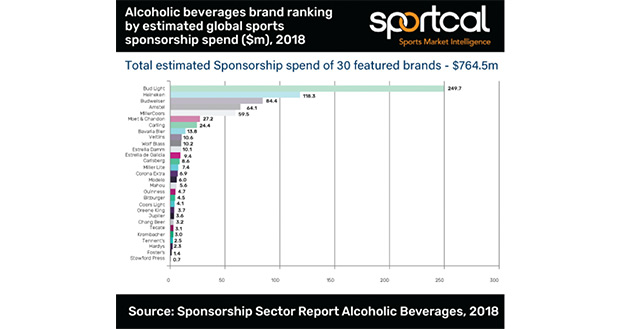 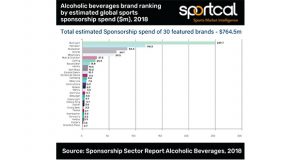 Alcohol and sport have long-been natural partners in sponsorship, with some of the world’s largest deals belonging to the sector. Annually, 30 of the world’s leading alcoholic beverage brands spend an estimated $764.5m on sports sponsorship representing 281 active deals, 89% of which are with beer brands, according to Sportcal, part of the GlobalData Group.

Sportcal’s latest report, ‘Sponsorship Sector Report: Alcoholic Beverages, 2018’, analyses the activity of 30 of the biggest alcoholic beverage brands to track the latest trends and forecast where this may lead to in future. The report reveals that the top 10 biggest alcohol beverage brand spenders account for 55.5 % of the 281 active deals and 87.6 % of the estimated $764.5m annual sports sponsorship spend. Soccer is responsible for almost half of the 281 active deals, with the European region and its individual teams accounting for the majority of the sectors total sports sponsorship spend.

Conrad Wiacek, Head of Sponsorship at Sportcal, part of the GlobalData Group, comments, ‘‘Overall spend is driven by a number of high-profile deals, each worth more than $150m per year. Examples include Bud Light-NFL, Budweiser-World Cup and Heineken-Champions League. These show the importance of sports sponsorship for certain beer brands as they seek to increase their visibility and sales volumes.’’

The Top 10 biggest alcohol beverage brand spenders are led by Bud Light, which on the back of sponsorship deals with the NFL and England’s Football Association, is said to shell out $249.7m per year, representing 35.2% of the total global alcoholic beverages sports sponsorship spend. Heineken, sits in second place from two big partnerships with the UEFA Champions League and Formula 1 and represents 16.7% of the annual spend, and 11% of the deals. Rounding out the top five is the main Budweiser brand in third position following its sponsorship of the 2018 FIFA World Cup in Russia, Amstel in 4th, which is associated with the UEFA Europa League, and US beer MillerCoors in 5th, associated with the IndyCar Series, NHL and various major league teams.

The report shows a strong focus on single market deals (84%), as opposed to continental or worldwide partnerships (16%), as brands tend to target domestic markets to attract consumers. Europe has the highest deal volume, with a 59.1% share, followed by North America, with 20%.

Wiacek added, ‘‘The alcoholic beverage sector faces a number challenges with sports sponsorship, with many health experts around the world recommending a ban on alcohol sponsorship on the grounds that it influences the consumption behaviour of teenagers and young adults, in particular, and contributes to binge drinking.’’

France and Russia are among the major sports markets that have legal restrictions on alcohol advertising.