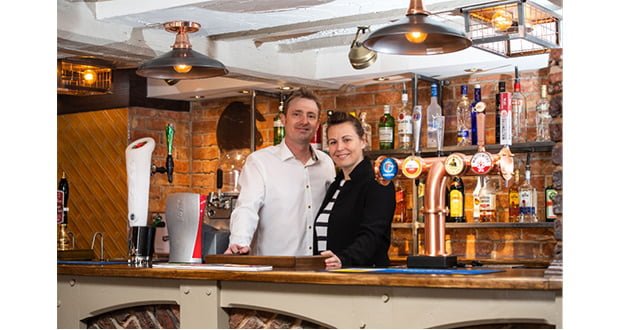 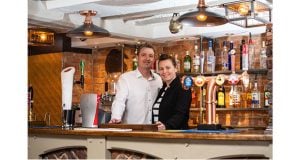 North West pub operator CJW Pubs has reopened The Pig on the Wall at Droylsden following a £380,000 refurbishment with Star Pubs & Bars to create a great quality family-friendly local.

The pub is CJW Pubs’ third leased site and its first with Star Pubs & Bars. It is also the local of CJW Pubs’ owners, Kelly Vickers and Jamie Whitaker.

Outside work has transformed the pub’s look, repainting the building and adding cladding and new lighting and signage to signal the changes inside. Originally a farmhouse, parts of the pub date back 400 years. The project has retained the traditional country feel inside, keeping features such as beams and a snug and bringing fireplaces back into use, whilst upgrading the pub throughout.

CJW Pubs’ aim is to restore The Pig on The Wall as “the backbone of the community” and the refurbishment facilitates this giving people a whole new range of reasons to visit. The project has opened up the interior to make space for entertainment, installed Sky and BT Sports along with high definition screens, put in an outdoor children’s play area and upgraded the kitchen so that homemade food can be a focus. With no coffee shop nearby, a new barista quality coffee machine has also been added.

Say Kelly, “The Pig on the Wall is our local so, although it had lost is way, we knew its potential. When it became available with investment attached, we didn’t hesitate to take it. Customers were drifting away to town centre venues but, as the only community pub in the area and with nowhere catering for families, there’s a great opportunity to offer residents a fantastic place on their doorsteps. The investment is vital to the pub’s success. We’d increased trade 20% in the months leading up to it but couldn’t have gone much further without a major revamp. We expect to increase sales a further 40% and shift trade from 90/10 wet/dry to 60/40 thanks to the refurbishment.

“The outside is urecognisable and has been brilliant at promoting the pub’s new direction. It helped pack out the pub for the relaunch and is attracting old customers back and bringing new faces in. Star has been great to work with – we’ve been involved throughout the planning process and had our ideas incorporated, so The Pig on the Wall truly feels like our pub.”

Comments Star Pubs & Bars operations director David Pritchard: “Jamie and Kelly have fantastic experience in the trade both with big organisations and running individual leased pubs. They’re completely engaged with the community around The Pig on the Wall and know just what it needs to succeed. Their expertise in food will also maximise trade and take the pub to another level.”