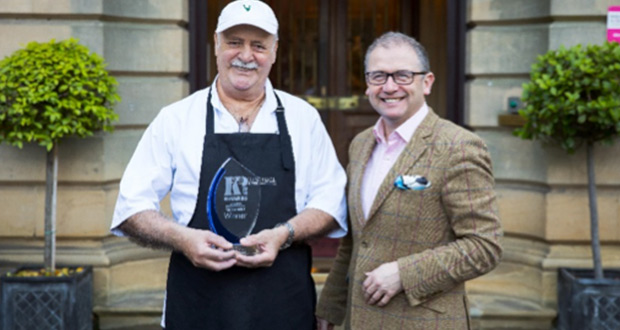 Aleks Riitmaa, known affectionately as Father Riitmaas, has beaten off strong opposition to claim the KP of the Year crown for 2018.  The award is the brainchild of warewashing specialist Winterhalter and is judged by a panel of top names from the foodservice industry.  Aleks has been a kitchen porter at the Crathorne Hall Hotel in North Yorkshire for over eleven years and was nominated by Alan Robinson, the hotel’s executive head chef.  “Father Riitmaas is thoughtful, generous, does the most thorough job and makes the whole team smile,” says Alan.  “He cleans and scrubs areas that other KPs didn’t even know existed!  He gets involved in the upkeep of everything, from the deep fat fryer to the compost bins and our bees.

“He’s also the unbeatable king of the dancefloor at every staff party!”

Stephen Kinkead is the managing director of Winterhalter UK.  “We had a really tough time sorting out the runners up in this year’s competition, because the level of entries was so high,” he says.  “However, picking the overall winner was relatively easy – Aleks was the unanimous choice, right from the get go.  At one point Alan described him as ‘a unique inspiration’, and as judges we could really see why.

“On behalf of everyone at Winterhalter, I’d like to offer huge congratulations to Father Riitmaas.”

Along with his trophy, Aleks wins £1,000 in cash, plus a celebratory dinner for family and friends. For the Crathorne Hotel his win means they receive a brand new Winterhalter warewasher.

“The judging was so tough that we couldn’t pick just two runners ups – so for 2018 we had to have three,” says Stephen Kinkead.  They are Suheil Ahmed, of Social Pantry, London; Martyn Dickers, of the Cardiff Marriott Hotel; and David Gadsby who is a relief kitchen porter for BaxterStorey.  Each receives a trophy and £250.

In addition, every single KP who was entered for the award receives an exclusive KP of the Year apron in a special presentation tin.

For the latest news about the KP of the Year awards visit www.kpoftheyear.com