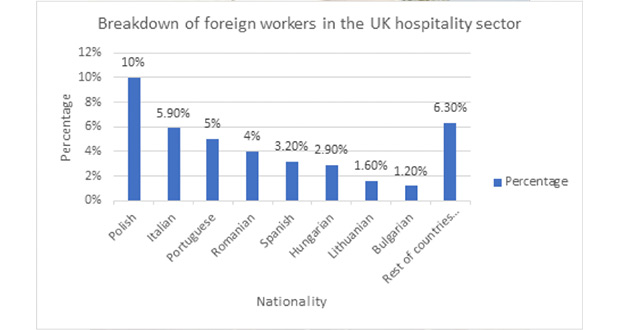 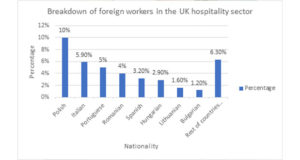 With the Brexit white paper from the Home Office emphatically stating that free movement of people will end in December 2020, the latest figures from Fourth, the leading global software partner to the hospitality and leisure industries, lay bare the industry’s reliance on workers from the European Union (EU).

The statistics reveal that, as of June 2018, 40% of workers in the restaurant, QSR (quick service restaurants/fast-food), hotel and pub sectors are from the EU. British workers make up 50% and the remaining 10% come from the rest of the world.  However, the numbers spike significantly for QSR, with almost three quarters (73.1%) of workers coming from outside the UK – 62.7% from EU and 10.4% from rest of the world.

Mike Shipley, Analytics & Insight Solutions Director at Fourth, said: “These figures clearly demonstrate how heavily reliant hospitality is on foreign nationals, especially in the quick service restaurant sector and back of house positions, such as chefs.

“The narrative in the Brexit white paper is concerning for the industry and if the free movement of workers is removed by 2020, there would need to be a quick and easy visa system, or it would have a very negative impact on UK hospitality businesses.

“In the face of this, it is crucial that employers understand the make-up of their workforce and undertake targeted recruitment strategies to future proof their business. At present, pubs, who traditionally employ a younger British demographic face the least risk, but other sectors, in particular quick service restaurants and restaurants, should look inwardly at their operations so they can retain their current employees and make their business a more attractive proposition for UK workers.”

Despite the referendum result in June 2016, there still remains a steady flow of foreign workers joining the hospitality industry with new starters from EU countries stabilising at 40% in June 2018, having fallen from 45% over the past 18 months. Meanwhile, the proportion of new starters from the rest of the world has increased by 1% over the same period. The proportion of EU workers leaving the industry has stabilised at 44%, having increased from 40% over the last 18 months.

Looking at staff turnover, quick service restaurants and pubs have the highest churn of workers, with the average length of tenure 10 months and 9 months respectively; while hotels and restaurants have a higher average tenure of 16 months.

The statistics were mined from Fourth Analytics and based on a sample comprising over 30,000 hospitality industry employees, with an even split across the restaurant, QSR, hotel and pub sectors.

Kate Nicholls, CEO, UKHospitality said: “This research underscores the message that UKHospitality has highlighted to the Government about the vital importance of EU workers to the hospitality sector, and the sector’s overall importance to the UK economy. The Government has provided employers with short-term reassurances but we are now at a stage where we need to be urgently discussing future immigration policy beyond the transition period; one that will have a significant impact on the landscape of the sector.”