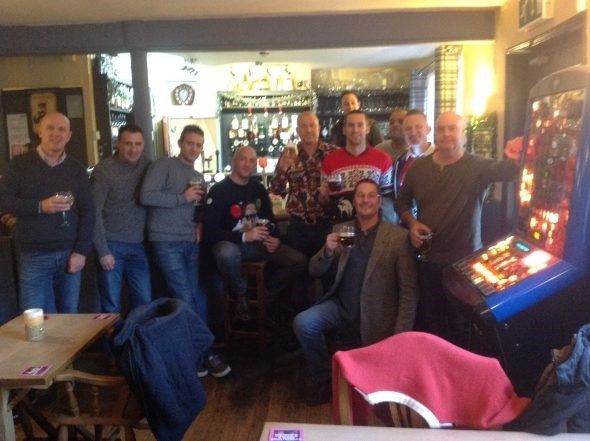 Almost a year to the day since they put out a serious fire at the Saracen’s Head, local firefighters were given a warm welcome when they visited the pub recently to enjoy a pre-Christmas beer or two. 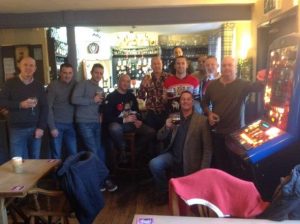 Landlady Melanie Roberson said, “We were delighted when we found out that some of the firemen drinking with us had been at the pub a year earlier and done such a great job extinguishing our chimney fire.  It was lovely to see them back in the pub in happier circumstances and thank them again for their heroic actions last December.”

The firemen, from Reading Fire Station, were part of a larger group of firefighters from several local stations who gathered in Henley to enjoy a few beers on the Ale Trail, which takes in a number of Brakspear pubs in the town, including the Saracen’s Head.

The fire at the Saracen’s Head last December started early evening and, because of its position in the chimney, proved difficult to control. Firefighters from four local fire stations, and a hydraulic platform, were needed to extinguish it.

Melanie added, “The fire last year was terrible, but it would have been much, much worse without the firemen’s skill and dedication. They took care to avoid damaging the pub while putting out the blaze, and we even managed to open for business the next day.  They saved the pub, and they saved last Christmas for us, so we’re glad they came back for a Christmas beer!”