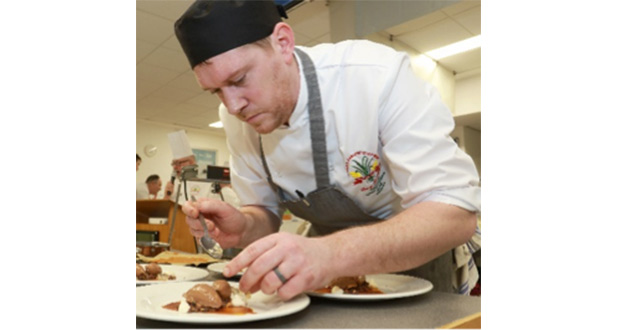 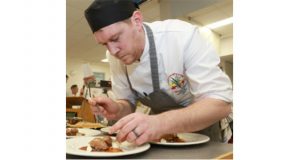 There was an early St. David’s Day celebration for Gavin Kellett after he was crowned the National Chef of Wales at the three-day Welsh International Culinary Championships held at Grwp Llandrillo Menai’s Rhos-on-Sea campus.

Kellett, from Crickhowell, who works at The Three Horseshoes Inn, Groesffordd, Brecon, emerged with the nation’s most prestigious culinary title following an exceptional final which saw him fend off a trio of chefs from the Chester Grosvenor.

A finalist last year, the 33-year-old went one better to pip 2018 Junior champion Arron Tye, from Penyffordd, to the crown, with Sam Griffiths, from Wrexham, in third and another 2018 finalist, Matt Ramsdale, from Weston Rhyn, near Oswestry, in fourth.

“I am very surprised to have won,” said Kellett. “It has been very hectic over the last three or four days preparing for this so to have won is up there with the best days of my career. I have done well in competitions before, but this is probably the biggest achievement for me.

“I try to do things a bit different with my own twist on classics. I wasn’t going to enter any more competitions after this, but I will have to change my mind now! I have to thank my wife who was with me today and also my work for allowing me the time off to enter. I am delighted.”

As well as the prestigious dragon trophy, Kellett will be invited to a study tour hosted by Koppert Cress in the Netherlands. He also received £250 worth of Churchill products and an engraved set of knives made by Friedr Dick.

The final brought the curtain down on three successful days of competitions at the Welsh International Culinary Championships, which welcomed hundreds of chefs and front of house staff to compete under one roof.

In addition to the National and Junior Chef of Wales contests, the Skills Competition Wales culinary finals and the Major International Regional Competition were held alongside the Battle for the Dragon contest.