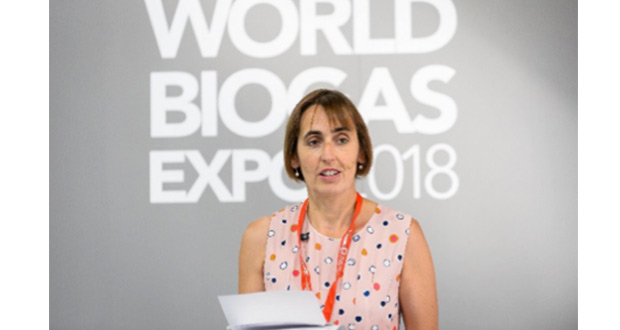 The Chief Executive of the UK’s Anaerobic Digestion & Bioresources Association (ADBA) has today called for the government to “do the right thing” and commit to universal separate food waste collections in England in its forthcoming Resources & Waste Strategy.

ADBA Chief Executive Charlotte Morton has personally written to senior ministers across government in recent weeks following suggestions that the inclusion of universal food waste collections for England in Defra’s forthcoming Resources & Waste Strategy is “unlikely”. Separate food waste collections are currently only available to a quarter of households in England but to all households in Scotland, Wales, and Northern Ireland.

Ms Morton’s letters, which have been sent to secretaries of state including Michael Gove, Greg Clark, and James Brokenshire, urge ministers to emulate the example set by the devolved nations and allow households and businesses across England to separate their inedible food waste from other waste streams so it can be collected to be recycled into renewable energy and nutrient-rich biofertiliser at anaerobic digestion (AD) plants.

Analysis by the National Infrastructure Commission (NIC) shows that the introduction of universal food waste collections in England would save up to £400 million in capital costs and £1.1 billion in operational costs for local authorities between 2020 and 2050, even accounting for the cost of introducing weekly food waste collections. Universal collections would also help local authorities to streamline their recycling systems and reduce the costs of sending black-bag waste to landfill.

On the environmental front, ADBA estimates that universal collections for households alone would achieve a carbon saving of between 1 and 1.5 million tonnes of CO2-equivalent per year, the equivalent to taking three quarters of a million cars off the road. 6 million tonnes of food waste is currently sent to incineration or landfill, with the vast majority of this being suitable for recycling through AD and some suitable for redistribution to humans or animals.

The UK currently has less than two years to bring into law the recently passed EU Circular Economy Package, which mandates EU Member States to introduce separate collections for biowaste (including food waste) by December 2023. The NIC and the Committee on Climate Change have both called for government to divert all food waste from landfill by 2025 at the latest, and the government’s own Clean Growth Strategy recognises that doing so would help the UK meet its 2032 Carbon Budget, support resource productivity, and avoid further emissions by preventing food waste in the first place.

“Separating inedible food waste from other waste streams so that energy and nutrients can be fully recovered has huge environmental and economic benefits. The government has a clear opportunity in its Resources & Waste Strategy to do the right thing and make the UK a leader in the growing circular economy by introducing universal food waste collections and meaningful support for local authorities in introducing these. Given the well-known scale of food waste and loss and its impacts worldwide, failing to do so would represent a real failure of leadership by ministers.

“Over the coming weeks, ADBA will be meeting senior government advisors and speaking to politicians from across the political spectrum at the autumn party conferences to hammer home the importance of sustainable food waste management and the need for urgent action.”