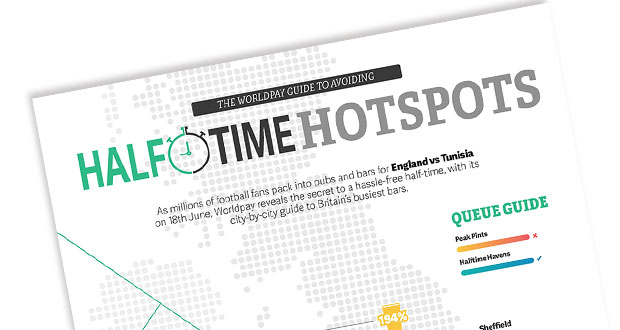 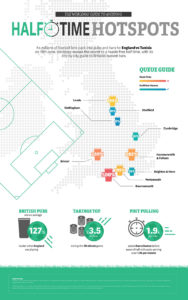 As millions of football fans pack into pubs and bars for England’s opening match against Tunisia on 18th June, Worldpay reveals the secret to a hassle-free half-time, with its city-by-city guide to Britain’s busiest bars.

Worldpay’s analysis of UK consumer spending data during major football tournaments found that Britain’s pubs are on average 127%, busier when England are playing, with takings topping £3.5 million during the 90 minutes of the match alone.

According to Worldpay’s data, pint-pulling peaks four minutes before the start of the second half, at which point pubs across Britain are serving almost 2,000 customers every minute].

Bournemouth wins the prize for the country’s biggest half-time boozers, with spending jumping fivefold at the end of the first half. In hot pursuit, bars in Bristol are 289% busier during the break, while watering holes in Hammersmith see orders increase by 282%. Watering holes in London are set to be some of the busiest in the country with no less than five boroughs featuring at the top of the table.

To avoid the queues, Nottingham is the ideal place to watch the match. Pub sales in the city remaining stable throughout games, with no increase in orders at half-time. Sheffield is similarly steady, with a mere 10% spike in sales.

Steve Newton, Executive Vice President, UK and Europe of Worldpay said: “Pub operators and fans alike will be praying that the Three Lions avoid a repeat of their last World Cup campaign. It’s been a mixed start to the year for the pub industry according to the latest BBPA Beer Barometer, but the World Cup, along with an exciting summer of sport, could help landlords to boost the coffers. Operators will need to get their strategy right to take advantage of the football frenzy, particularly during the half-time rush in the busiest parts of the country like Bournemouth.

“Updating your till technology is one way to speed up service. Arming staff with mobile point of sale is an efficient and flexible way to ease pressure around the bar and serve customers directly at the table. Enabling customers to order ahead for half time and offering a safe and secure tab option are also important for creating that seamless service to keep the punters happy. But the innovation doesn’t need to stop there – we’ve seen one pub even introduce two-pint glasses to help cut queues at peak times!”