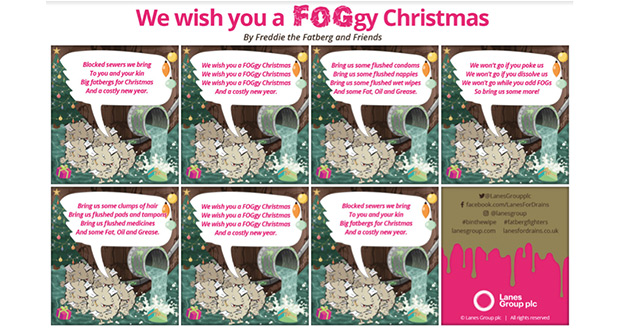 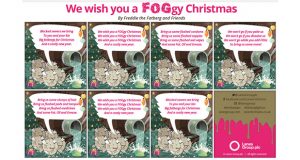 Chefs, homecooks and the British public are reminded to dispose of fats, oils and grease (FOG) responsibly this Christmas, with a new take on an old carol to help spread an important message.

Fatbergs are formed when non-biodegradable items such as wet wipes, sanitary products and nappies are flushed down toilets and combine with FOG. The problem worsens during the festive season, when chefs and those hosting Christmas dinners dispose of huge quantities of liquids like goose and turkey fat, gravy and other foodstuffs down the sink.

In spite of these habits, some 75% of people said they were either ‘quite aware’ or ‘very aware’ of the dangers of pouring FOG down the drain.

Michelle Ringland, Head of Marketing at Lanes for Drains, said: “Christmas is a time for celebrating and enjoying festive feasts with the family, but nobody will be celebrating if the nation’s sewer system gets clogged up by beastly fatbergs in the new year.

“Pouring fatty liquids down the sink and rinsing oily pans and plates not only adds to the problem of fatbergs, but could lead to costly blockages and drainage issues in your own home or on restaurant premises. The only safe way to dispose of any food or cooking liquid is in a bin.”

In addition to adopting more responsible kitchen habits, people are being asked to remember the simple ‘3Ps’ rule when it comes to toilets and bathrooms: the only things that are safe to flush down the loo are pee, poo and paper – anything else can lead to blockages and adds to the growing problem of fatbergs, especially the use of disposable wipes.

Research from Water UK earlier this year revealed that disposable wipes make up around 93% of the material in sewer blockages and are estimated to cause around 300,000 blockages every year, at a cost of £100 million to the country. Furthermore, waterways charity Thames21 revealed that more than 5,000 wet wipes were found in a single area of the Thames foreshore measuring 116 square metres, which is the highest number of wet wipes ever found in a single place in the UK.

Michelle said: “Blue Planet II was one of the biggest TV shows of 2017/18 and helped to raise awareness of plastic pollution around the globe, but people need to understand that there are hidden plastics in products like wet wipes and sanitary items that are being flushed down the loo on a daily basis.

“As we look ahead to 2019 we need to continue this focus on cutting our plastic use and reducing our impact on marine life, starting with being more responsible about what goes down our toilets, sinks and drains.”