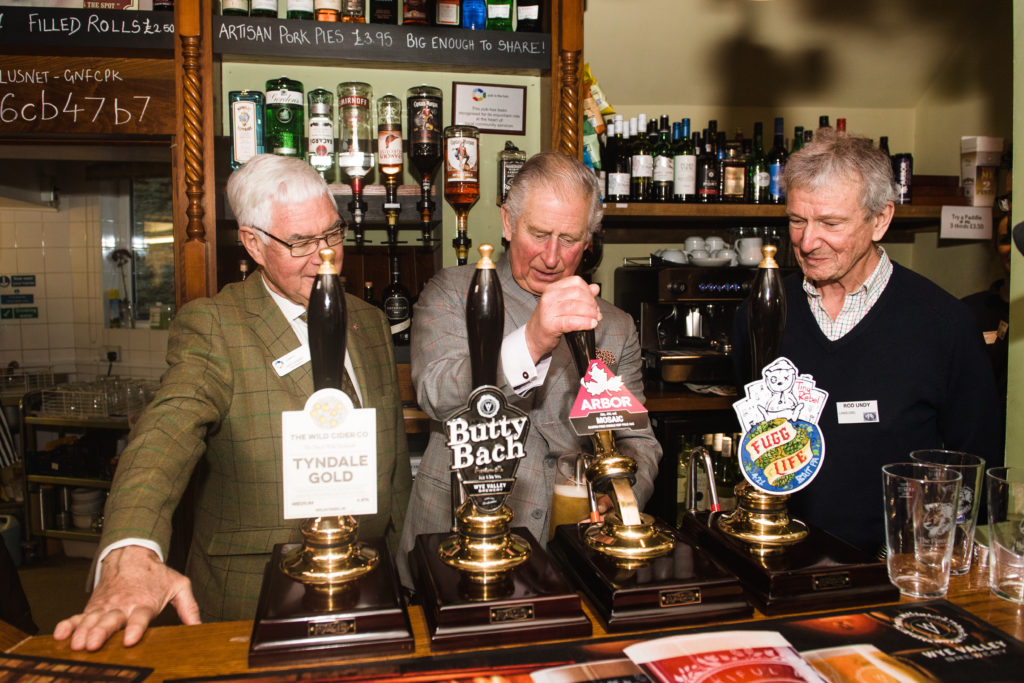 The Prince Of Wales visits The Fleece Inn in Hillesley, Wotton-under-Edge - 14th December 2018

HRH The Prince of Wales paid a visit to the community-owned pub, The Fleece Inn at Hillesley, to highlight the importance of great pubs within rural communities. 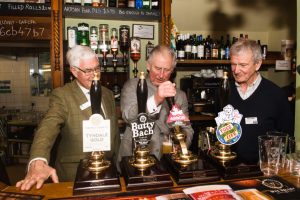 He was greeted by the children from Hillesley Primary School before going into the pub to meet representatives ofthe pub’s clubs, societies and sporting teams. He even managed to throw a few darts on the way and to pull his own pint of a pint of Mosaic pale ale by local brewery Arbor Ales.

The Fleece Inn dates from the 17th century and is the last remaining pub in the parish of Hillesley and Tresham. In 2011, the pub closed for trading after the regional chain that owned the pub failed and the building was under threat of redevelopment. Residents in the village came together to see what they could do to retain the pub and to make it a hub at the heart of the community.

A specialist advisor from Pub is The Hub, Anthony Miller, gave the village general advice on the acquisition. Five families underwrote the purchase and 120 members of the community contributed to the funding and became shareholders in Hillesley Pub Company Ltd. The freehold purchase was completed in June 2012 and with overwhelming local support from the village, the pub was refurbished and redecorated in order to reopen its doors again as a free house, all within five weeks in July 2012.

After four years of ups and downs, it was decided to switch the business model and appoint tenants on a leasehold basis. Rod Undy and Karen McGeoch became tenant licensees in late 2016, with the pub now thriving. It was recently named CAMRA Pub of the Year 2018 for the South West region.

The pub trades as a traditional local with a loyal customer base from the village and the immediate surrounding area, but also attracts ramblers walking The Cotswold Way. Two darts teams have formed as well as a golf society, and the pub is used by the local football, tennis, bridge and cricket teams, as well as a weekly cycle group. They also hold regular charity fundraisers and work closely with the church, the school and the Parish Council.

Licensee, Karen McGeoch said: “The visit was fantastic for us, the pub and the community. His Royal Highness was very relaxed and seemed to really enjoy himself, having some great banter with the locals. He even offered a local cider maker the chance to visit his own private orchard and had a lovely chat with the village’s oldest resident, Margaret Plummer.”

John Longden, Chief Executive of Pub is The Hub added: “His Royal Highness has always been keen to maintain essential services in rural communities and we were delighted that he chose to visit this lovely community-owned pub to raise awareness about the vital role that pubs play in our day-to-day lives.”