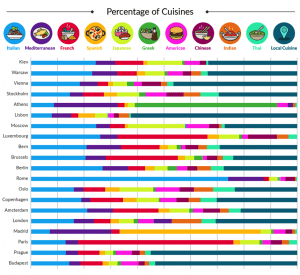 AccorHotels has analysed 51,918 restaurants and 76 different cuisines across Europe’s capital cities in a bid to reveal the continents most favoured food.

New data from AccorHotels reveals that Italian food is Europe’s favourite, with the highest number of restaurants across the top 20 European capitals.

French and Mediterranean cuisine came in 2nd and 3rd with 7,605 and 4,774 restaurants respectively across Europe.

While Spanish and Greek fill up the 4th and 6th spots, it has become clear that Europe has an appetite for far-eastern cuisine, with Japanese restaurants coming in as Europe’s 5th most popular cuisine.

Interestingly, this trend was spearheaded by Moscow, which has over 1,000 Japanese restaurants – meaning 1 in 5 of the city’s eating establishments is dedicated to this cuisine.

Portuguese is the least popular cuisine, and restaurants are few and far between outside of Portugal, averaging just 0.39% density across the other 19 cities.

There are 2,889 British restaurants in London, meaning we do favour our own food – however, Amsterdam aren’t so fond of Dutch food – and has the smallest proportion of restaurants dedicated to its native food, making up only 15.5% of the city’s total.