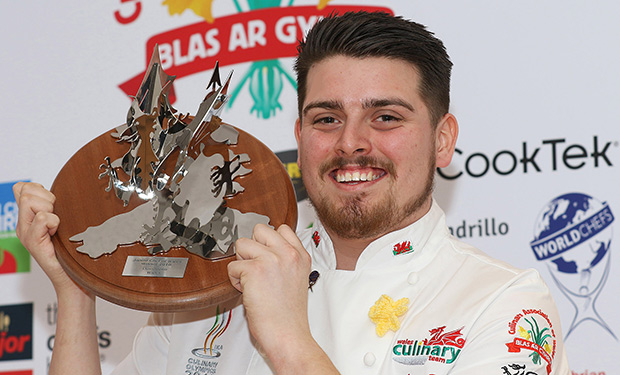 Arron Tye bidding to add the National Chef of Wales title to his accolades.

Two Junior Chef of Wales champions will be competing to add the coveted National Chef of Wales title for 2019 to their list of achievements when the semi-final heats are held in January.

Following a bumper entry for both competitions, 10 chefs have been selected for the National Chef of Wales semi-final heats at Coleg Ystrad Mynach, Hengoed Campus on Monday, January 14.

They include Arron Tye, 23, from the Grosvenor Pulford Hotel and Spa, Chester who won the Junior Chef of Wales title in February and Andrew Tabberner, 26, head chef at The Bull, Beaumaris who was junior champion in 2015.

Returning to the 2019 competition after being finalists this year are Matthew Smith, 35, form Lake Vyrnwy Hotel, Llanwddyn; Gavin Kellett, 33, from Crickhowell and Matthew Ramsdale, 26, from the Chester Grosvenor, Chester.

Eleven chefs will contest the Junior Chef of Wales semi-final heats at NPTC Group of Colleges in Newtown on Monday, January 7.

Oliver Thompson, 20, from The Bull, Beaumaris, a finalist in this year’s competition, returns with a second bid for the title and is joined by workmate Lee Millington, 21.

In both competitions, the chefs will be given three hours to cook and serve up a three-course menu for four people. They must use a majority of Welsh products, which will form part of the marking schedule for judges.

National Chef of Wales competitors will cook a starter suitable for vegans, a main course using two different cuts of Welsh Beef and a dessert including chocolate as the main ingredient.

The Junior Chef of Wales competitors will cook a menu with a starter suitable for vegans, a main course using Welsh Lamb and a dessert including Welsh honey.

The winners and three highest scoring runners up in each competition will qualify for the finals to be held at the Welsh International Culinary Championships (WICC) at Grŵp Llandrillo Menai, Rhos-on-Sea next February.

The finals of both competitions will be held on Thursday, February 28, the last day of the three-day WICC.

The National Chef of Wales winner will be invited to a study tour hosted by Koppert Cress in the Netherlands and will receive a set of engraved F. Dick Knives and £250 worth of Churchill tableware.

Awaiting the Junior Chef of Wales winner is an all-expenses-paid visit to the World Chefs Congress 2020 with the Culinary Association of Wales where he will be part of the Worldchefs Young Chefs Club.

In addition, he will be invited to a study tour hosted by Koppert Cress in the Netherlands, receive a set of engraved F. Dick Knives and be seeded through to the semi-finals of the Young National Chef of the Year contest organised by the Craft Guild of Chefs.

To qualify for the competitions, chefs must be of Welsh descent or work or study in Wales. National Chef of Wales entrants must be over the age of 23 and Junior Chef of Wales competitors must be between the ages of 17 and 23 years on February 1, 2019.

Arwyn Watkins, Culinary Association of Wales president, said: “We are delighted that so many Welsh chefs, both from within and outside of Wales, have entered the competitions.

“The calibre of entries is very impressive and it’s healthy for the association to see several new names in the semi-final heats. These competitions provide a perfect platform for the best Welsh chefs to showcase their talent and skills.”