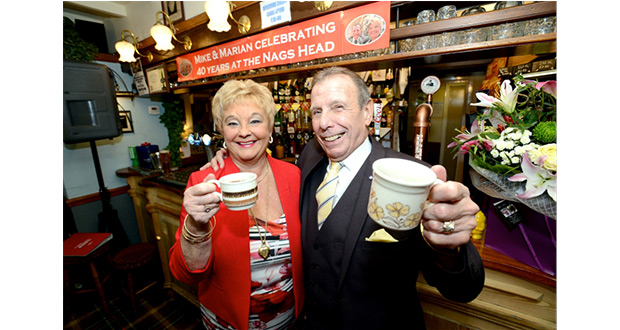 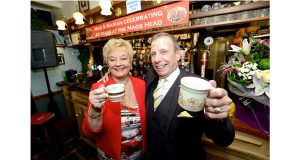 January 2019 is a major milestone for licensees Michael and Marian Rouse who are celebrating 40 years behind the bar at Nag’s Head, Preston Village and nearly 50 years running pubs in the area.

To mark the occasion, the couple invited 48 of its longest standing regulars to a celebratory tea to say thank you for their support over the last 40 years and a further 100 regulars to an evening party.

Since taking on the lease of the Nag’s Head, Michael and Marian have turned the pub around, maintaining its popularity while other pubs around have closed. They’ve transformed it from a run-down drinker’s pub to a fantastic family friendly country pub offering home-cooked food. It’s also the location for many local celebrations with people in Hull and the surrounding villages holding birthday parties, anniversaries and wakes at the pub.

Marian said: “The Nag’s Head was in a bad state when we took it on with old bus seats used for seating. We liked it because it was in the country, somewhere we used to cycle past on our days off. Shortly after we took it on however we were snowed in for three days underneath a leaking roof. At the time we wondered what we had done and almost ran away.   I am glad we didn’t as we’ve had 40 wonderful years and our customers have become our friends and are almost family.”

Since taking on the pub, the couple have helped raise £195,000 for local charities, through monthly quiz nights, regular charity fundraisers and hosting the annual village show with its stalls, produce and craft competitions. “It all started when we held our first charity pub quiz 40 years ago. I can’t name a local charity for which we haven’t help raise money. We do a lot for the local hospital and children’s charities. Customers are so generous as it is the same people coming to events.”

Looking to the future, Marion said: “Customers keep saying we have to be here so they can celebrate their major milestones, like their 50th or 70th, at the pub . We have no immediate plan for retirement. Mind you, I don’t know if we’ll make it another 10 years, even though we do love it!”

Helen Ralphe, 86, a Preston resident said: “I don’t know of any landlord and landlady who have been in pub for 40 years.   Marian and Mike really look after the village and care about their customers. At Christmas they hang the names of deceased customers on a Christmas tree in their memory and they have raised lots of money for charity over the years. I’ve been going to the Nag’s Head for 35 years and still go to the weekly dominoes. They’re always thinking of others and make sure I have a lift home.

“Over the years I have taken part in two pantomimes at the pub, been to a vicars and tarts night and five years ago shaved my head for charity which raised £5000. Marian and Mike took me to the hospital so I could personally hand over the money.”