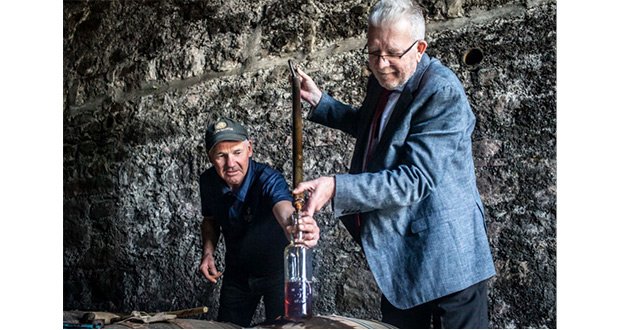 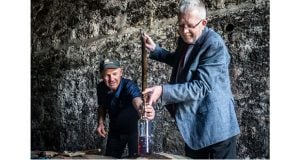 Michael Russell MSP visited Glen Scotia Distillery as part of a new campaign to position Campbeltown as the “whiskiest place in the world.”

The Argyll & Bute member was presented with a unique bottling as the distillery prepared for the annual Campbeltown Malts Festival, which gets underway tomorrow [Tuesday 21 May].

During the visit the MSP, who is also Cabinet Secretary for Constitutional Affairs, had an opportunity to see some of the oldest parts of the distillery, which date back to the 1830s and to meet some of its staff.

The one-off bottle is dedicated to the MSP and his visit to Glen Scotia, with Campbeltown described on the label as “the whiskiest place in the world” in honour of the region’s illustrious past. In the Victorian era Campbeltown was home to more than 30 distilleries and known as ‘whisky capital of the world’.

Iain McAlister, distillery manager, said: “It was a pleasure to welcome Michael Russell MSP to our distillery. We’re very proud of our exceptional single malts and their contribution to both Campbeltown and Scotland’s world-leading whisky industry. Research suggests that Campeltown was the predominant Scotch whisky for almost 100 years.

“Whisky is in our DNA in Campbeltown. After being at the forefront of production distilling has become a way of life here and we’re looking forward to sharing our passion for whisky with visitors to this year’s malts festival.”

Michael Russell MSP, said: “It was great to meet the team at Glen Scotia Distillery and learn more about their award-winning single malts.

“It’s very encouraging to see how Glen Scotia is helping to attract visitors to the Campbeltown and boost recognition of its role in Scotch. I wish it well with its new campaign.”

The 57.4% ABV Scotch gifted to the MSP is among several whiskies due to be sampled straight from the cask by visitors taking part in Glen Scotia’s dunnage tastings during the Campbeltown Malts Festival.

The festival, which runs from 21-23 May showcases the region’s distinctive single malts.

As part of the event, Glen Scotia is set to host two sold-out whisky dinners, a distillery open day, tours and a variety of tastings. New to its programme this year is the Glen Scotia Coastal Connection Tasting session with Master Blender Michael Henry, who will explore Campbeltown’s history, explaining how it has shaped and influenced the town’s whisky heritage to this day.