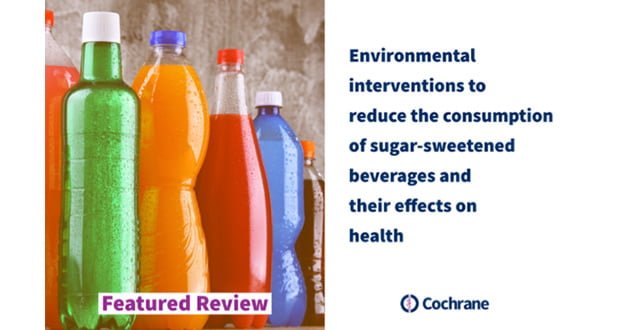 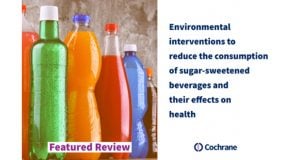 Increasing the price of sugary drinks and using traffic light labelling can help reduce consumption, a study suggests. A number of measures appear to be effective in cutting intake of sugary drinks, according to a new Cochrane review of available evidence.

Consumption of sugary drinks is considered to be a key driver behind the global obesity epidemic, and is linked with tooth decay, diabetes and heart disease. Many public health bodies including the World Health Organization (WHO) have called upon governments, the food and drink industry, educational institutions, places of work and civil society to support healthier beverage choices. A new Cochrane Review summarizes evidence from research studies testing different ways of reducing consumption of sugary drinks at a population level.

A team of researchers from Germany and the UK looked at the results from 58 studies that assessed a range of approaches and strategies aimed at changing the physical or social environment where people consume or buy sugary drinks. The studies were done in a variety of settings, including schools, cafes, restaurants, homes, and retail outlets. The studies assessed a wide range of different approaches to reduce consumption such as labelling and pricing of sugar sweetened drinks and healthy alternatives. They also looked at broader policy initiatives such as community-based campaigns to encourage healthier choices. The studies were conducted in 19 different countries from North and South America, Australasia and Europe and South East Asia.

Within the broad categories of interventions studied, (labelling, nutrition standards, price increases and subsidies, home-based interventions, interventions aimed at the whole food supply, retail and food services, and intersectoral approaches such as food benefit programs and trade and investment policies), the certainty of the evidence for specific measures ranged from very low to moderate.

The review authors identified a number of measures which the available scientific evidence indicates reduces the amount of sugary drinks people drink. These measures included:

The Cochrane authors also found evidence that improved availability of drinking water and diet beverages at home can help people lose weight. There are also other measures which may influence how much sugary drinks people drink, but for these the available evidence is less certain.

Past research has shown that health education and taxation of sugar-sweetened beverages can also help to reduce their consumption, but these approaches were not examined in the current review. Taxation of sugary drinks, unprocessed sugar and sugar-added foods will be examined in two future Cochrane Reviews.

Review author Hans Hauner, Professor of Nutritional Medicine at Technical University Munich, Germany, and a world-leading expert in the field, commented: “Rates of obesity and diabetes are rising globally, and this trend will not be reversed without broad and effective action. Governments and industry in particular must do their part to make the healthy choice the easy choice for consumers. This review highlights key measures that can help to accomplish this.”

“More than a year since the soft drinks industry levy was introduced, manufacturers have cut the amount of sugar in their products while hundreds of millions of pounds have been raised in revenue to promote healthy eating in schools and tackle child obesity.

“However, as this report demonstrates, more can and should be done by the soft drinks industry to improve customer choice, such as better labelling and providing healthier alternatives.

“Some energy and sports drinks have up to nearly 17 teaspoons of sugar in a 500 ml bottle – more than twice the daily allowance for adults.

“What is needed is a universal adoption of a labelling system which provides an instant ‘at-a-glance’ understanding of sugar content.

“Raising awareness of the amount of sugar in food and drink while giving families a more informed choice is crucial if we are to make a vital breakthrough in the fight against tooth decay and obesity.”