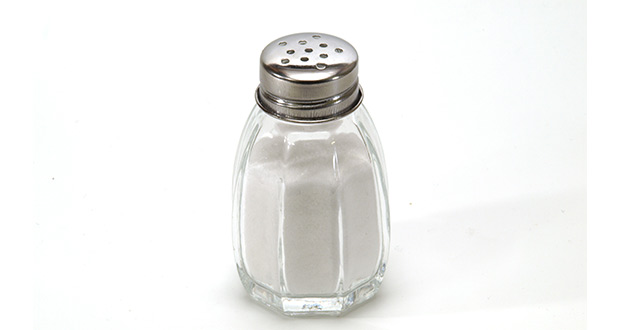 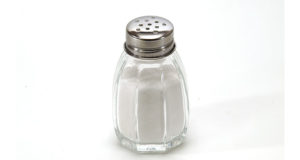 A recent nationwide survey by Action on Salt has revealed that the salt content of salads bought from restaurants, sandwich/coffee shops and fast food outlets has increased by 13% since a 2014 survey, rinsing from 1.65g to 1.86g per serving on average.

More than a third (36%) of the 213 restaurant, sandwich/coffee shop and fast food salads surveyed contained a disturbing2g of salt or more per salad, The worst offender according to the survey was Nandos Mediterranean Salad with Chicken Breastand extra hot sauce, with 6.2g salt – more than an adult’s entire DAILY recommended limit of salt in just one salad!

Surprisingly, Pizza Express Grand Chicken Caesar Salad with Dough Sticks contains 5.3g salt per serve – more than their Classic Margherita Pizza and McDonald’s Grilled Chicken and Bacon Salad with Balsamic Style Dressingcontains the same amount of salt as their Cheeseburger. Even salads deceivingly branded as ‘healthy’ contain high amounts of salt, such as Benugo’s Supercharged Omega Salmon with 3.5g salt, over half of an adult’s maximum recommended daily limit.

Although nutrition information was available at the majority (15/21) of the restaurant and fast food chains included in the survey (either on pack, on the shelf label or at the counter on request) only one chain (Costa) provided full colour-coded nutrition information. Without this information readily available at their disposal, consumers struggle to know which options contain the least amount of salt, making it impossible to make an informed decision. This clearly demonstrates the need for clear consistent nutrition labelling in restaurants and fast food outlets to help customers compare products and make healthier choices.

Sarah Alderton, Nutritionist at Action on Salt says, “Salads are typically considered to be a healthy option, but restaurants and retailers are continuing to add unnecessarily high amounts of salt and saturated fat to their salads and putting the health of their customers in jeopardy.  We want the food industry to be transparent by displaying clear, colour-coded nutrition information on front of pack or at the point of sale, to help consumers make a more informed decision wherever they choose to eat.”

Mhairi Brown, Nutritionist at Action on Salt, adds, “Up to 75% of our salt intake comes from salt added to food by manufacturers and this survey demonstrates just how easy it is to unwittingly eat excess salt, with such high amounts added to our go-to ‘healthy’ choice of salads. This survey highlights the urgent need for Public Health England to reinvigorate the UK’s salt reduction strategy”

Graham MacGregor, Professor of Cardiovascular Medicine at Queen Mary University of London and Chairman of Action on Salt, adds, “It’s shocking to see that certain restaurants and supermarkets have failed to take responsibility to reduce salt – especially after our 2014 survey exposed their dangerously salty salads. Reducing salt is the most cost-effective measure to reduce the number of people dying or suffering from strokes or heart disease. We are now calling on PHE to take immediate action.”