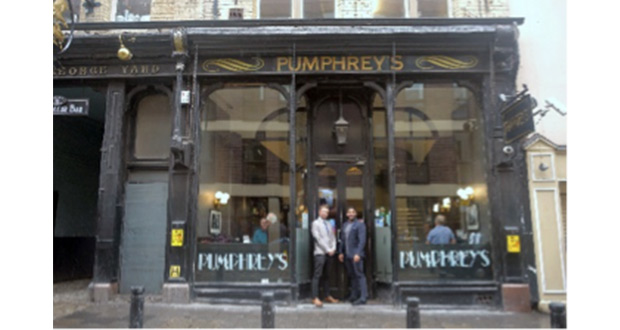 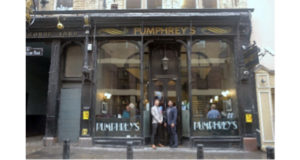 A HISTORIC Newcastle bar has become the first business in the city centre to tap into a Heritage Lottery Fund regeneration grant to help improve the face of one its most famous streets.

Malhotra Group plc, which operates Pumphrey’s Bar and Cellar at the Bigg Market, has secured a HLF grant thanks to NE1 Ltd to help transform the frontage of the Grade II listed building.

The grant comes as part of an ongoing £3.2 million regeneration programme which aims to breathe new life into an area known for its night life, by helping to restore it to its former glory.

As part of the multi-million pound scheme, Business Improvement District company, NE1 Ltd received a £1.6million Heritage Lottery Fund grant to work with businesses with premises in the Bigg Market and Cloth Market.

NE1 Ltd is managing the project, which aims to transform the area and reverse decades of neglect and under investment.

The Malhotra Group Plc, which boasts Pumphrey’s among its ever-expanding business portfolio, has been a supporter of the regeneration since the first plans were released three years ago.

Having leased out the building until very recently, the firm now operates the bar itself and is looking forward to the work getting underway.

“We have just very recently signed the relevant contracts and the work will begin in the next month,” said operations director Atul Malhotra.

“The total anticipated cost of the project will be £100,000 and will involve new signage, cleaning up of the exterior of the building, the installation of new window frames and just generally restoring the building to its former glory.

“Pumphrey’s started life as a coffee shop and was one of the first premises in the area to be granted a licence to sell alcohol. It is part of a very historic street which I believe is really set to benefit from this investment.”

The Bigg Market dates back to the Middle Ages, when it was the site of a thriving market place, taking its name from a type of course barley known as Bigg barley which was sold at many of the stalls.

“For the last two years, the Malhotra Group has been extremely supportive of the NE1-led plans for the area and it is hugely encouraging that such an established and successful property group have recognised and grasped this opportunity

“The coming months will see development in the area move on a pace with several other buildings in the pipeline. It really is an exciting time for the area as Newcastle regains its historic heart.”