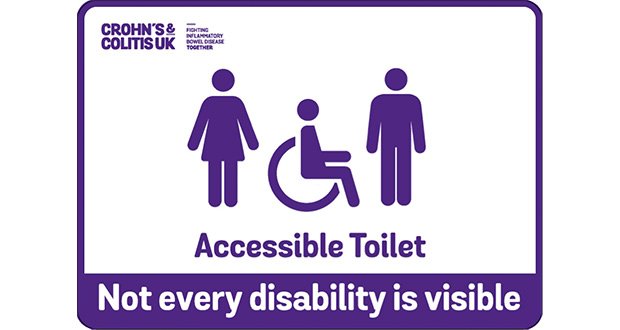 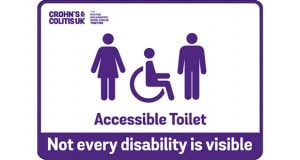 A campaign to raise awareness about “invisible disabilities” is targeting UK’s largest restaurant and pub chains, encouraging them to install new accessible toilet signs and to train their staff to increase awareness of Crohn’s Disease and Ulcerative Colitis. The campaign by charity Crohn’s and Colitis UK says that questioning healthy -looking customers for using accessible toilets is doing more harm than good.

Last year, you told us that 80% of people with Crohn’s or Colitis said they felt more comfortable visiting venues with the Not Every Disability is Visible signs installed.

87% of people thought the campaign has already had a positive effect in tackling stigma and reducing isolation.

The new campaign, the charity says, delivers on our ambitious plans to continue the fight to change public perceptions of disability and get our signs installed in even more locations across the UK, and they are targeting major high street brands like Nando’s, Wetherspoons, Greene King Pubs and McDonalds.

For these businesses, this is a small change, but for people with invisible disabilities like Crohn’s or Colitis, this can be life-changing.

To help promote the launch, Crohn’s & Colitis UK released the results of a survey which showed that people with invisible disabilities are targets of discrimination by the well-meaning UK public because they are using accessible toilets when they “don’t look disabled”:

93% of the public who challenge a healthy-looking person for using an accessible toilet think they are “standing up” for the rights of disabled people or that it’s “not fair” on others.​

61% of negative incidents experienced by people with Crohn’s or Colitis for using the accessible toilets they urgently need, have manifested as verbal and/or physical abuse.

81% of people with Crohn’s or Colitis think that the public have little understanding of these conditions and are quick to judge those living with them.

Which is why the charity is calling for the general public, companies, and the Crohn’s and Colitis community to come together to help change accessible toilet signage and more importantly, attitudes.

Sarah Sleet, CEO, Crohn’s & Colitis UK said “I’m always worried about being challenged by someone when I come out of an accessible toilet – I feel as though I have to plan what I would say before leaving just in case someone decides I don’t look disabled enough. I get really anxious, worrying about someone having a go at me for being in toilets that are ‘supposed to be for disabled people.’ It’s ridiculous. I know I’m allowed to use them, but people can be so cruel.”