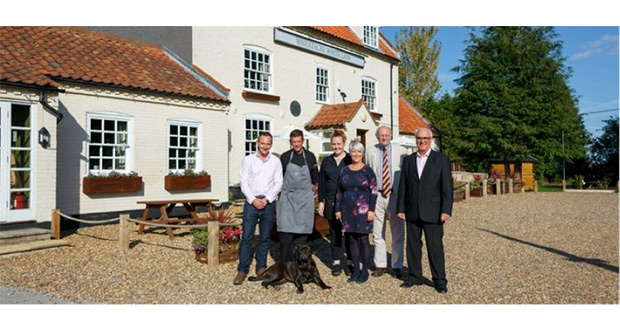 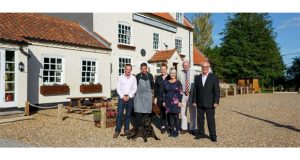 The White Lion in Wheatacre, run by an ex-offshore service engineer, has been chosen as the South Norfolk Community Pub of the Year 2018, winning a £500 cash prize for its revival and improvement of the pub’s services in just a year.

The cash prize will fund a celebratory community event at the pub.

Owner at the White Lion, Jay Meades took over the pub just over a year ago leaving behind a career as an offshore engineer and closed it for three months to refurbish everything. The White Lion improvements included creating a cosy bar and restaurant, four letting bedrooms, an outdoor beer garden, and a caravan and camping park.

Supported by Pub is The Hub, the South Norfolk District Council-run competition is in its tenth year where pub customers are asked to vote for the favourite pubs across four categories; best for customer focus, service, family-friendly and tastiest food and drink.

A short list was drawn up and the finalists were scrutinised by a judging team, made up of district councillors and Terry Stork, the representative from Pub is The Hub. They visited the finalists, looking at their trading areas, catering kitchens and beer cellars and talked to the licensees about how they make a difference in their respective neighbourhoods.

Terry Stork commented: “Once again, it has been a very tough competition to judge and we had four outstanding finalists. Considering that the White Lion is Jay’s first pub it is a remarkable achievement to have turned the pub into a thriving business in such a short period. All the judges were agreed that the White Line is a superb pub with an outstanding licensee that had been brought back to the heart of the community and was a well-deserved winner.”

John Longden, Chief Executive for Pub is The Hub commented: “South Norfolk District Council should be congratulated for running this inspired competition each year that showcases licensees and the fantastic work they do for their respective communities. They have a deep understanding of the valuable role that pubs play in communities.”