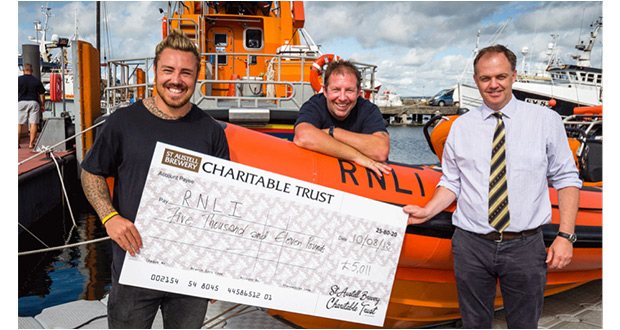 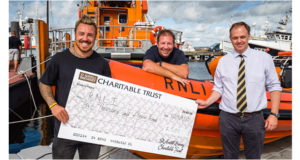 The traditional Cornish Pale Ale, which was crafted on our Small Batch and launched in January to coincide with the start of the Six Nations Rugby tournament, with 5p from every pint going to the RNLI.

Rugby star Jack Nowell became our Charitable Trust ambassador in 2016. Jack’s father is a trawlerman and the family have had a close connection with their local Penlee RNLI lifeboat for many years.

Jack said: “A big thank you to everyone who enjoyed a pint of Cousin Jack. It’s another great amount raised for the RNLI through the Charitable Trust and hopefully we can raise a bit more on the night through the extra cask donated by St Austell Brewery.”

The ale, which was sold in pubs throughout the Westcountry, sold over double the amount anticipated by the Brewery, making the beer a real success.

Martin Breading, our National Sales Director said: “We were delighted when Jack chose to support the RNLI through the Cousin Jack beer, and the success of it has been phenomenal across both years it has been on sale. Working with people like Jack is great and when we can raise much needed funds as part of these relationships, it’s even better.”

Since its inception in 2003, the St Austell Brewery Charitable Trust has raised over £750,000 for local charities, individuals and organisations in need, with over £200,000 of that total coming from the company’s annual fundraising Celtic Beer Festival in November.

The cheque presentation took place on Friday afternoon (August 10th) at the newly renovated Swordfish Pub in Newlyn. It was handed over to Coxswain Patch Harvey and the Penlee lifeboat crew by Jack Nowell and Piers Thompson, our External Relations Director.

RNLI Coxswain Patch Harvey, said ‘We are overwhelmed with the amazing amount of money raised through the sales of Cousin Jack. Our grateful thanks, and those of the RNLI, go to our close friend and loyal supporter Jack Nowell, and to the St Austell Brewery Charitable Trust. Donations such as this help the RNLI and our station in Newlyn to continue saving lives at sea – for that we are extremely grateful”.

To find out more about the Charitable Trust or to make a donation request, visit www.staustellbrewery.co.uk/Charitable-Trust.