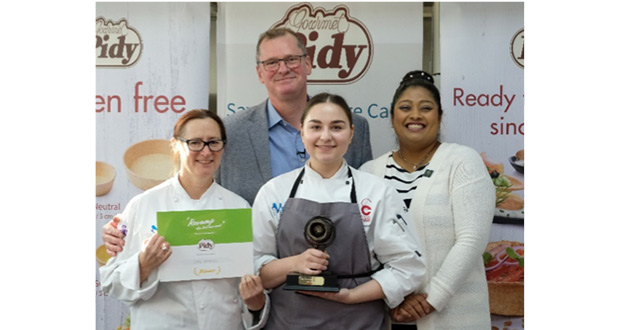 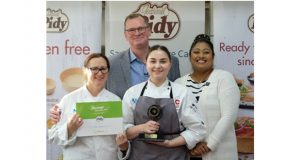 Pidy is delighted to reveal that Chloe Hammond from Milton Keynes College has been crowned the overall winner of the “Pidy Revamp the Vol au Vent” Competition for her ingenious Strawberry & Raspberry Ripple Vol-au-vent. Rachel Able from the London Geller College of Hospitality & Tourism, University of West London was Runner Up for her wonderful Mexican and Black Bean Parcel.

Chloe and Rachel competed alongside six finalists from across the country, in the live Grand Final Cook-Off, held at the Claire Clark Academy at Milton Keynes College. The students were challenged to ‘revamp’ the traditional vol-au-vent, using one of three best-selling Pidy vol-au-vents. The dish had to be a canape, a starter, a main course or a dessert with a street food theme and be as creative and inventive as possible.

Chloe’s winning vol-au-vent consisted of five different layers, each of which reflected a different theme. For example, the layer of strawberry mousse was reminiscent of the fresh fruits sold in street markets across the UK. The white chocolate drizzle was inspired by the waffles and crepes often found in Belgium and the praline shards reflected street food in New Orleans during the 18th and 19th century. The whole Vol au Vent was coated in a cinnamon glaze to give it a doughnut style finish.

All of the finalists did exceptionally well not only designing their own recipe but also presenting their skills on the day in a professional manner. The judging panel, made up of Claire Clark MBE, Robert Whittle, General Manager of Pidy UK and last year’s ‘Revamp the Vol-au-vent’ winner, Marian Tandy, were impressed by not only the exceptional creativity and high standards of the final dishes but also the cleanliness of the students’ workspace, their efficient preparation and the techniques used to create their dishes.

The judges praised Chloe’s ‘Strawberry and Raspberry Ripple Vol-au-vent’ for its “traditional flavours, presented in a new and innovative way”, and enthused about “Chloe’s attention to detail and the way she included different components from multiple street foods initiatives from across the globe.” They also remarked on how “Chloe had not only produced a delicious dessert but really understood the brief and thought about the practicality of serving it in a street food environment.”

Chloe Hammond, from Milton Keynes College was delighted to win the competition:

“My aim was to combine everyone’s favourite desserts that are often found at theme parks, festivals and markets all over the world into one dish. I really wanted to concentrate on packing in as many different complementary flavours and elements into the vol-au-vent as I could by utilising the neutral base of the pastry. The raspberry and mint jam provides a slight sharpness against the sweet ganache and subtle mint flavour, whilst the finishing touch of a cinnamon glaze really added to the appearance, flavour and texture of the overall dish. I am so pleased to have won, especially because the quality across the board was exceptional and everyone interpreted the theme in a unique way!”

Robert Whittle, General Manager at Pidy UK was thrilled with the outcome of the competition and with the achievements of every student who took part in the Live Cook-Off Final:

“Our young chefs are very talented and to witness what they have achieved during this competition has made me extremely proud. Each of the students really took the brief on board and created their own unique and delicious dish using the Pidy vol-au-vents.

It’s an important aim for Pidy to connect with students and to be part of their journey into the industry. It’s inspiring to see the fresh, innovative ideas that the students produced from a challenging brief.”