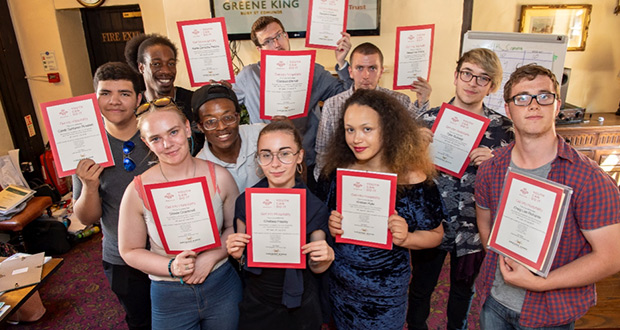 The UK’s leading pub retailer, Greene King, and youth charity The Prince’s Trust have confirmed plans to deliver further employability programmes together as they enter the third year of their partnership.

Since its launch in 2016, the partnership has already supported 244 young people nationwide. Plans are now in place to grow that figure to at least 350 young people by the end of year three. The partnership will introduce an additional Ready to Work programme, which targets those closer to the job market but still in need of support, as well as those struggling with underemployment.

The charity’s Get into Hospitality programme with Greene King, which helps 16-30 year-olds get work experience and training in the hospitality industry and aims to plug the skills shortage among unemployed young people, welcomed its latest cohort in London last month. And before getting underway, the group heard from 22-year-old Rahina Begum, who took part in that first programme back in 2016 and now feels part of the Greene King ‘family’.

Although Rahina, from London, was born and went to school in the UK, her strict family environment meant she had limited freedom. As she got older, she became increasingly frustrated at this, and decided to purchase a mobile phone against her family’s wishes. When they found out, she was sent to live in Bangladesh, where she was threatened with forced marriage, had her passport taken away and was told she was not allowed to return to the UK.

Rahina grew more and more frustrated with life and began to self-harm. She said: “When I lived in Bangladesh, I was at home 24/7 for three years. I wasn’t allowed to go anywhere, and it was the same for my mum. My brothers had control over us.”

With her mum’s help, Rahina finally made it back to London but with only her passport. She didn’t have a National Insurance number, any employment experience, or the necessary qualifications so she struggled to find work. She became isolated, her confidence was low and she could only rely on the one friend she was living with at the time for any source of income.

Rahina found out about The Prince’s Trust from a friend who lived close to one of the charity’s local centres and she soon started the Fairbridge programme, which seeks to build the confidence and self-esteem of young people. Slowly, Rahina began rebuilding her life.

She was then referred to the Get into Hospitality programme and Greene King apprenticeship scheme, which helps to provide unemployed young people with the confidence and skills to move into the workplace.

Despite being quiet at first, Rahina soon came out of her shell. She recalls: “I was excited to start the programme because I knew I was going to be doing a lot of fun activities, but my favourite part was getting the chance to meet new people. I was able to talk to everyone and I never felt left out.”

In March 2016, Greene King pledged to take on a further 10,000 apprentices by 2019 and, since joining the pub company and brewer, Rahina has started an apprenticeship, working in the front-of-house team.

“I’m still working for Greene King and I really love it here. We’re like one big family and they are all so supportive, especially after having my daughter four months ago.

“The Prince’s Trust and Greene King gave me my confidence back and allowed me to go out into the world and achieve great things. They gave me back my smile, not the fake one, but the real one!”

Nick Stace, UK chief executive at The Prince’s Trust, said: “We are delighted and extremely grateful to Greene King that our work together on the Get into Hospitality programme continues to be a success. Stories like Rahina’s are proof that this partnership is thriving and, as we enter its third year, we are excited for what the future holds, helping more young people to gain the skills and – vitally – the confidence to live, learn and earn.”

Rooney Anand, Greene King’s chief executive officer, said: “The work we have done with The Prince’s Trust over the last two years has been so rewarding, especially for our teams who have supported the programme. We know we have an important role to help young people build a career and our partnership with The Prince’s Trust is one of the ways we do this. It is great to see so many of those taking our course then come to work for us and continue their learning through our apprenticeship programme. We are looking forward to welcoming many more young people onto the programme and joining our company over the next year.”

To find out more about taking part in the Get into Hospitality and Ready to Work programmes, visit the Prince’s Trust website: https://www.princes-trust.org.uk/help-for-young-people