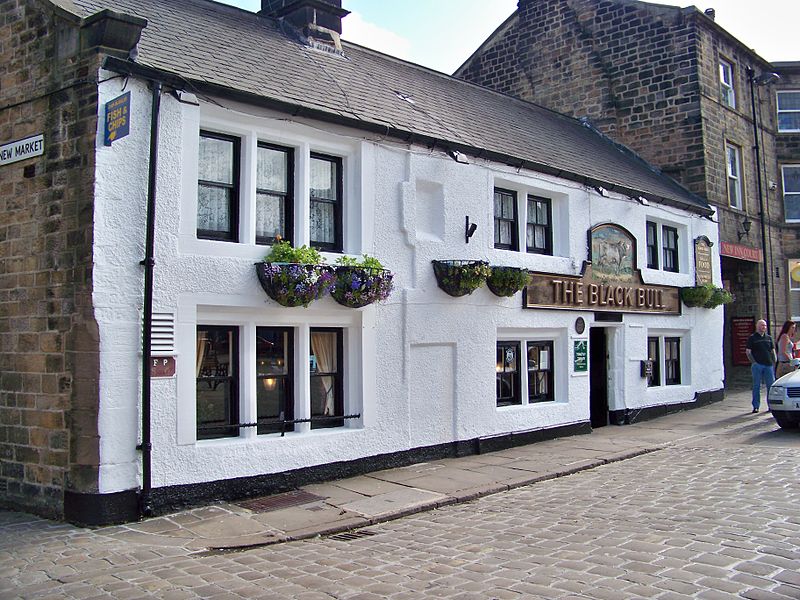 Plans to refurbish two Yorkshire pubs have been slammed as corporate vandalism by a pub group.

Otley Pub Club, the town’s community group who support and promote Otley’s pubs, have written to Star Pubs and Bars to oppose what the call “wholly inappropriate and destructive plans for two historic Otley pubs, the Black Bull and the White Swan.’

Star are proposing totally unsuitable refurbishments to both pubs, despite them both being Grade II listed buildings in the Otley Conservation area.

The computer-generated image of the 16th century Black Bull has caused outrage, with the fine historic frontage ruined and the heritage signs destroyed in place of modern ‘steakhouse’ stencilling. Ludicrously for the oldest pub in Otley, Star intend to “reposition The Black Bull as a modern, stylish pub”, rather than celebrating and promoting the ancient heritage and genuine history of the pub.

The plans for the White Swan, a traditional pub (much of which is estimated to be around 250 years old), involve ripping out the appealing multi-room interior, replacing it with “industrial style furniture, contrasted with softer botanical features and finishes to turn the pub into an attractive space with a trendy, city-centre feel”.

Otley Pub Club have written to Star asking to meet with them in Otley and to cancel their inappropriate plans and either come up with appropriate plans to retain the historic character of both pubs or to sell them.

Otley Pub Club are sharing the letter and their serious concerns about these two pubs with local councillors, Otley Town Council and Otley Conservation Task Force, a local organisation who seek to preserve the historical architectural heritage and integrity of the town. They are also alerting English Heritage (Historic England) and SAVE, with both pubs being listed and the two local CAMRA branches and the Society for Preservation of Beer from the Wood West Yorkshire Branch.

“Both the Black Bull and the White Swan are listed and in a conservation area, so it’s just disgraceful that Star Pubs and Bars have come up with such inappropriate plans. They are both historic pubs, both centuries old and this character should be preserved and celebrated, not destroyed by being absurdly turned into modern, trendy venues, which just won’t work as well as being architecturally destructive.

“We urge Star/Heineken to put these dreadful plans on hold and meet with the community and the excellent sitting licensee of the White Swan to discuss how they can and should work with him to keep the pub as it is respecting the will of the community and regulars”.

“The plans for these two historic pubs are appalling and akin to the kind of corporate vandalism seen back in the 1970s and 70s when large brewers ripped the heart and character from so many historic pubs. What’s so disgraceful about Heineken/Star’s plans for the White Swan is that the pub is successful, with a very loyal clientele, all of whom would be alienated by these awful plans”.

“It is also deeply revealing that these utterly ill-considered refurbishments not only mean unrealistically higher rent for the licences, but that they lose their legal right to go free-of-tie via the Market Rent Only option. This is cynical and more so when these crazy plans will do so much damage to the pubs concerned. We urge Heineken to learn more about the Otley pub scene and work with the community and with proven successful landlord Chris Shippey to ensure that these two fine pubs can continue to serve Otley with their existing historic character intact”.