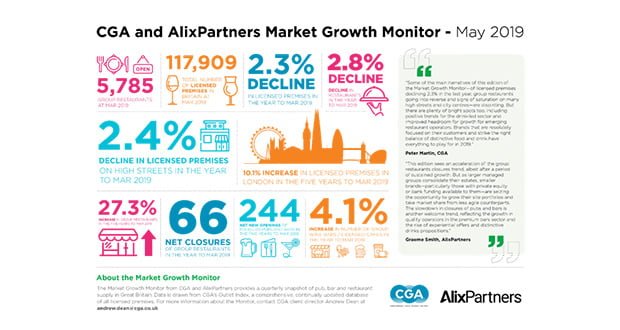 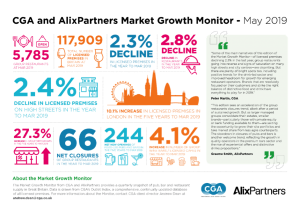 The number of restaurants in Britain fell by 2.8% in the year to March 2019, the latest edition of the Market Growth Monitor from CGA and AlixPartners reveals—with high streets in the south of England, excluding London, hit especially hard by closures.

The figure equates to net closures of 768 restaurants over 12 months, or around 15 a week. It marks a fifth successive quarter of decline in the sector, bringing to an end a boom period that saw restaurants grow in number by more than 15% between 2013 and 2018.

The bulk of closures have been of independents, but group restaurants—managed sites from operators with more than one location—also fell in number, by 1.1%. The pace of closures for these group operators was significantly higher in the south of England (2.8%) than in the north (0.4%)—a sign that restaurant levels have reached saturation point in many southern towns and cities. Group restaurant numbers on British high streets meanwhile fell by 2.4% over the 12 months to March, in sharp contrast to net openings of 1.8% in suburban areas.

But while restaurants struggle, the Market Growth Monitor reveals a more positive picture for the drink-led pubs and bars sector. Three years ago the report found that closures in this part of the market were averaging 31 a week—but the rate tumbled to 13 a week in the 12 months to March 2019. With premium and all-day bars performing particularly well, it suggests that Britain’s long-term clear out of unsustainable pubs may be nearing an end.

CGA vice president Peter Martin said: “CGA research has charted a remarkable surge in restaurants over the last decade—but our latest Market Growth Monitor makes it clear that the gold rush is over. Some distinctive and resolutely customer-focused restaurant groups continue to flourish, but for brands that have over-reached themselves or lost sight of their proposition and purpose, there are undoubtedly more tough times ahead. Major challenges on British high streets, like rising costs and declining footfall, are adding another layer of difficulty.”

AlixPartners managing director Graeme Smith added: “The positive take on this clear out is that ambitious and well-resourced operators now have more headroom for growth, and the Market Growth Monitor identifies bright prospects for many groups in the drink-led pub and bar space in particular. Brands that can deliver a compelling premium drinks offer and strike the right balance with food have all to play for in 2019 and beyond. The next 12 to 24 months offer an opportunity for well-funded restaurant groups to expand into prime sites at much reduced costs—and if you can catch the right consumer wave the returns are impressive.”