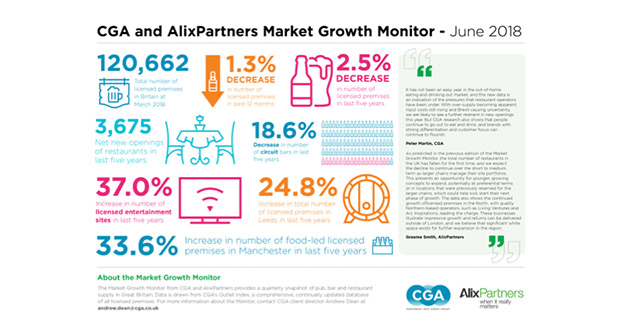 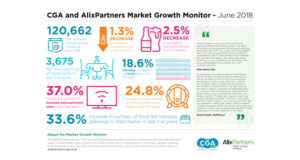 The number of restaurants in Britain fell by 0.4% in the year to March, the new edition of the Market Growth Monitor from CGA and AlixPartners reveals.

The decline comes amid fears among many operators of oversupply of sites in the market and is a sign of the challenges that are currently faced by casual dining operators, following a sustained period of new openings. Market Growth Monitor data shows that restaurant numbers rose by 15.6% since March 2013, but planned site closures by several major brands have now helped to contribute to a fall over the last 12 months. The 0.4% decline is equivalent to nearly two net closures a week in the restaurant sector.

Research from CGA’s suite of market-leading sources indicates broadly flat sales, rising food costs and modest but improving confidence among leaders of the out-of-home eating and drinking sectors. A further retrenchment in restaurant numbers is now likely in the second half of 2018, the Monitor suggests—though many casual dining brands continue to expand their estates around Britain.

Across all licensed premises, the Market Growth Monitor records a 1.3% fall in numbers in the 12 months to March 2018. That marks an acceleration in the pace of closures since the last edition of the Monitor, which recorded a year on year drop of 0.3%.

But despite the challenges in some sectors and some parts of Britain, the Monitor also identifies a more positive picture in other areas—especially major cities in the north of England. In Leeds, the number of food-led licensed premises rocketed by 37.9% in the five years to March 2018, with growth in Manchester (33.6%) and Liverpool (31.9%) nearly as steep. The report also shows a rise in the number of entertainment-based licensed premises, contrasting with a decline in circuit bars.

The quarterly Market Growth Monitor is an exclusive snapshot of Britain’s licensed premises, and provides deep insights into restaurant pub, and bar supply across the country. Its data is drawn from CGA’s Outlet Index, a comprehensive and continually updated database of all licensed premises.

CGA vice president Peter Martin said: “It has not been an easy year in the out-of-home eating and drinking out market, and this new data is an indication of the pressures that restaurant operators have been under. With over-supply becoming apparent, input costs still rising and Brexit causing uncertainty, we are likely to see a further restraint in new openings this year. But CGA research also shows that people continue to go out to eat and drink, and brands with strong differentiation and customer focus can continue to flourish.”

AlixPartners managing director Graeme Smith said: “As predicted in the previous edition of the Market Growth Monitor, the total number of restaurants in the UK has fallen for the first time, and we expect the decline to continue over the short to medium term as larger chains manage their site portfolios. This presents an opportunity for younger, growing concepts to expand, potentially at preferential terms or in locations that were previously reserved for the larger chains, which could help kick-start their next phase of growth.”