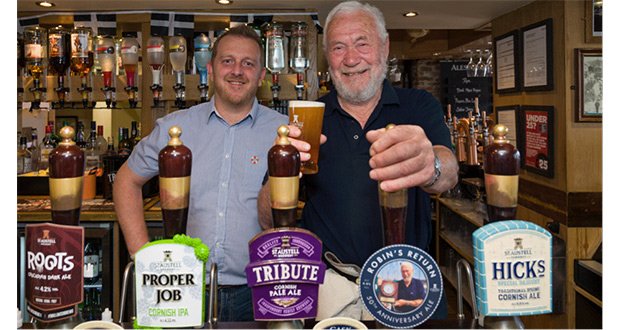 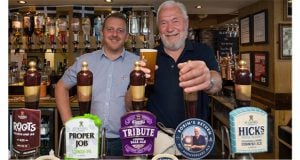 Sir Robin Knox-Johnston, the first person to sail solo and non-stop around the world, returned to Falmouth over the bank holiday weekend to celebrate 50 years since he won the Sunday Times Golden Globe Race.

On Sunday (21st April), St Austell Brewery unveiled two pairs of Sir Robin’s footprints, cast in bronze, along with Falmouth Harbour Commissioners, to mark the date he departed Falmouth and his historic return to the town after 312 days at sea. Sir Robin was one of nine sailors who took part in the gruelling race and the only man to stay the course. He returned to Falmouth in his 32-foot wooden vessel, Suhaili, on 22nd April 1969.

The bronze footsteps were unveiled on North Quay next to the Chain Locker pub, which was Sir Robin’s first stop on returning to dry land 50 years ago. Returning to the pub once again over the weekend, Sir Robin was served a pint of ‘Robin’s Return’ – a special beer we brewed to mark the anniversary.

The footprints were the brainchild of Demelza Knights, who works for Falmouth Harbour Commissioners (FHC) at Falmouth Haven.

Demelza said: “We’re very proud to have unveiled these bronze footprints to celebrate the historic moment that Sir Robin returned to Falmouth 50 years ago. I’d like to thank St Austell Brewery, who were the main sponsors of the footprints, along with Falmouth Harbour Commissioners, Falmouth Pottery, Felix Packer, Cornish Bronze, Tim Marsh, Ross Theobald, and of course, the good people of Falmouth and Cornwall who made generous donations through the Just Giving page. Thank you to one and all.

“It is fantastic to have a permanent reminder of Sir Robin’s historic sailing achievement in the heart of Falmouth for future generations to see.”

Nathan Boundy, General Manager, Chain Locker said: “It was a pleasure to have welcomed Sir Robin back to the Chain Locker once again. The sun shone throughout the weekend celebrations and there was a brilliant atmosphere in the pub and around town – it was Falmouth at its best.

“Sir Robin is a sailing hero so it’s really special to have something so close to our pub to remind people of where he started, and ended, his extraordinary Golden Globe race.”