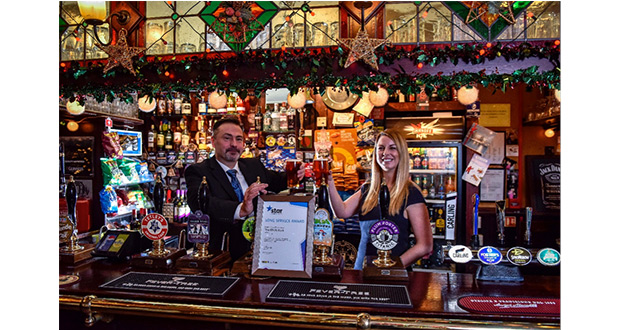 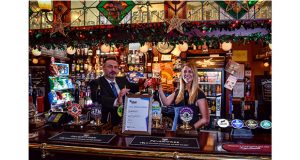 Wakefield city centre’s longest serving publican – Shaun Slater of The Black Rock on Cross Square – received a long-service award this week in recognition of his
20 years as the licensee, and nearly 40 years’ total service, at the pub.

51-year old Shaun was just 14 when he started stocking shelves at The Black Rock in 1981 and, including his years as a member of staff, has clocked up almost four decades there. The award from Star Pubs & Bars highlights the contribution he has made to the community during his time at the pub.

Says Shaun: “My mum was the pub’s cleaner and I began here as a way to earn a bit of pin money. After leaving school I went on to work as The Black Rock’s trainee manager and then to manage pubs for other people but I always continued to do shifts at The Black Rock. I worked at over 50 pubs across Yorkshire, but The Black Rock was always my favourite. When it became available in 1998, I jumped at the chance to take it as my own.”

Named after Yorkshire’s coal mining past, the Grade II-listed Black Rock dates back to 1842 and is one of the city centre’s last remaining traditional pubs. It offers no sports or hot food and is known for its great beer and chat as well as an extensive range of snacks.

“I’ve seen many pubs and bars open and close and trends come and go in Wakefield since I took over, but I liked the Black Rock as it was when I started and I’ve kept it as similar as possible. It’s like stepping back in time; other than a new gin range and a greater choice of beers – we’ve got six casks on hand-pull now, and when I started we only had two ­– nothing else much has changed,” says Shaun.

Many of Shaun’s customers have remained the same, too, and Shaun is now serving his third generation of some families.

Despite the lack of changes, The Black Rock has stood the test of time. The pub had its busiest year ever in 2017 and has won numerous awards as well as a listing in The Good Pub Guide for the last 14 years. It is also gaining an increasing number of younger customers attracted by its great cask beer and the lack of loud music. “You can hear yourself talk in the pub, so we’re a popular place for dates,” jokes Shaun.

Looking to the future, Shaun says his aim is to remain as The Black Rock’s licensee for another 20 years: “I’m passionate about The Black Rock and its reputation – it’s like home and a lot of my customers are like family.”

Adds Star Pubs & Bars business development manager Adele Mason: “It’s a great honour to present this award to Shaun. Thanks to his stewardship, The Black Rock has retained its place as a Wakefield institution and a fantastic pub, which attracts visitors from across the UK. It’s a tremendous achievement to keep a pub at the top of its game for over 20 years and all down to Shaun, his high standards and great customer care.”