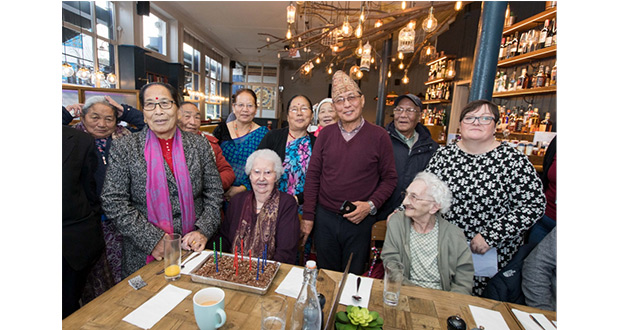 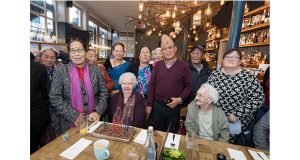 The pub teamed up with local charity Skills & Care Greenwich as part of Heineken’s Brewing Good Cheer Campaign, which encourages pubs across the UK to bring those in socially isolated situations together by hosting free lunches.

15 Greenwich senior citizens including elderly Gurkhas together with volunteers from Skills & Care Greenwich were treated to a three-course Christmas lunch including soup or pate for a starter, a choice of roast turkey, salmon, pressed duck or a mushroom wellington for a main course, and Christmas pudding, white chocolate cheesecake or poached pears for dessert.

Originally founded by local Greenwich resident, Sonia Thapa, to help elderly Gurkas connect with the wider community Skills & Care Greenwich runs English classes, arts and craft sessions and health & wellbeing workshops. Today the charity’s focus extends beyond the Gurkha community to making a difference to socially isolated elderly people living in Greenwich and those living in poverty on the margins of society. It redistributes surplus food through a twice weekly soup kitchen and acts as a crucial access point to many other services.

The self-funded volunteer run charity has helped 2000 people since its formation five years ago. It now has hundreds of volunteers ranging in age from a 12-year-old to a 97-year-old lady, who was a guest at the lunch and for whom the charity is dear as she herself was in the armed forces.

Sonia Thapa commented: “Social isolation and fear affects the poor and the elderly across all cultures. We wouldn’t be able to work without the support such as that provided by The Old Tiger’s Head and Heineken’s Brewing Good Cheer. Events like these mean a lot to the people going to them and help communities to reconnect. There should be more of them.

“As a charity we don’t have much. The heating failed in the centre we use which meant we wouldn’t have had anywhere to meet but thanks to The Old Tiger’s Head we’ll be able to meet at the pub. So, it’s much more than a Christmas lunch, it’s a life saver and the start of an ongoing relationship.”

Caskaway Taverns Operations Director, Simon Boulter said: “We want The Old Tiger’s Head to play a pivotal role in the community, bringing people of all ages and backgrounds together. we reopened the pub, that we’ve been able to do just that and host a festive lunch for elderly people who don’t get out much.

“I feel passionately that we should check on and help our neighbours. In the same way that talking to someone on the street can make their day, getting people together for a lunch like this is extremely important. It keeps old people young and is good for the community as a whole. We tried to recreate the atmosphere of celebrating a Christmas lunch with family and friends. The only thing we didn’t provide was Santa Claus!

“When we heard that Skills & Care Greenwich had nowhere to meet this winter due to lack of heating, we realised we could help. They will now be able to have weekly get togethers at the pub and we look forward to welcoming them back soon.”