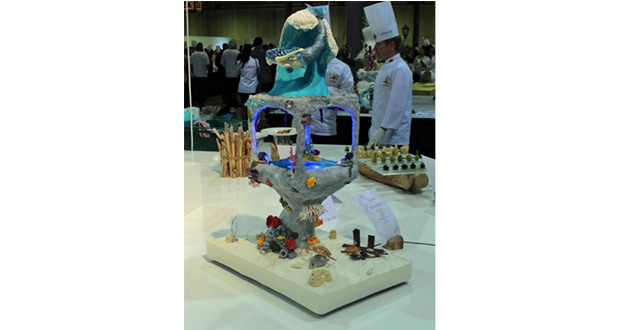 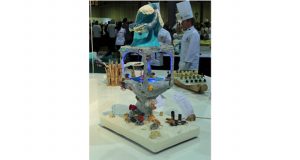 Four months of meticulous work in her spare time came to fruition for a North Wales lecturer when she revealed a culinary art showpiece at the Culinary World Cup in Luxembourg last week.

Sally Owens, a lecturer at Grŵp Llandrillo Menai in Rhos-on-Sea, was a member of the Culinary Team Wales squad that won silver and bronze medals at the event, which attracted the world’s best chefs.

She marked 10 years of working with the team by creating one of her most ambitious showpieces for the cold table display. New rules this year meant that the showpiece was excluded from the points awarded for the display, which gave her licence to experiment.

As 2018 is themed the Year of the Sea by Visit Wales, the Welsh Government’s tourism arm, Sally opted for a marine showpiece complete with a mermaid, turtle and levitating stingray. She made the stingray levitate by using magnets.

“It was different to every other showpiece on the cold table displays which were all made out of chocolate and blown sugar,” said Sally. “It was nice to be different and we had good feedback, although some didn’t quite get the mixed medium modelling.

“I tried to do something a bit wacky that I hadn’t done before. It began with the internal structure with in-built lights and a levitation plate, which took me six weeks to master. I had to include a magnet in the stingray model, which was set within a cave.”

The resulting showpiece was 92cms tall and most of it was edible, made with modelling paste, rice crispie treats, chocolate, royal icing, pastillage, isomalt and flower paste.

Over the past decade, she has made eight showpieces for Culinary Team Wales to take to international competitions and says her favourite was a royal ice tiered cake in 2012. She also competed as a team member for most of this time.

Probably her best known creation was an intricate wedding cake made for the marriage of the Duke and Duchess of Cambridge in 2011, which took her 300 hours to complete.

Toby Beevers, Culinary Team Wales manager and pastry chef, thanked Sally for her unstinting support over the years as a team and squad member.

“Sally’s showpieces are phenomenal and some have scored as high as 99 points,” he said. “For example, the royal icing cake that she made was a top end gold medal winner.

“For the Culinary World Cup, we wanted to do something a bit different and put a wow factor in the showpiece.”