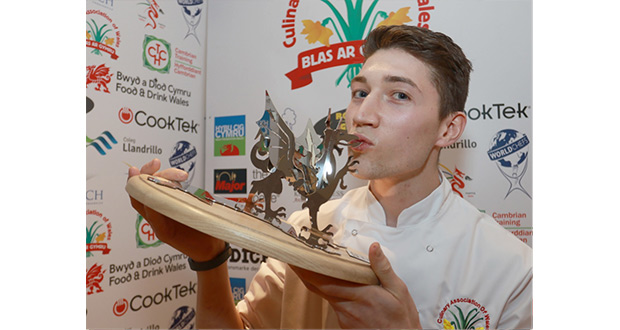 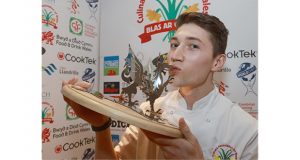 In a captivating final featuring four of the top chefs in Wales aged between 17-23, Hughes, who works at Carden Park, Chester, impressed the judges with his scintillating take on a three-course meal for four people that included a vegan starter, a main course including Welsh lamb, and a dessert with Welsh honey. They had three hours to complete the challenge.

The 20-year-old will now be seeded through to the semi-finals of the Young National Chef of the Year organised by the Craft Guild of Chefs. All four Welsh finalists had qualified by winning their challenging regional events.

“I am absolutely thrilled to have won, but I have to admit that I am shocked!” said Hughes. “I wasn’t expecting to win at all. The other three chefs are of a very good calibre so the standard was high in the final. To have won is brilliant. It will take a while to sink in.”

He will now go on an all-expenses-paid visit to the the Worldchefs Congress 2020 with the Culinary Association of Wales, who organised the WICC, where he will be part of the Worldchefs Young Chefs Club.

In addition, he will be invited to a study tour hosted by Koppert Cress in the Netherlands and received a set of engraved F. Dick Knives, as well as £100 worth of Churchill products.

The WICC are organised by the Culinary Association of Wales and the main sponsor is Food and Drink Wales, the Welsh Assembly Government’s department representing the food and drink industry.