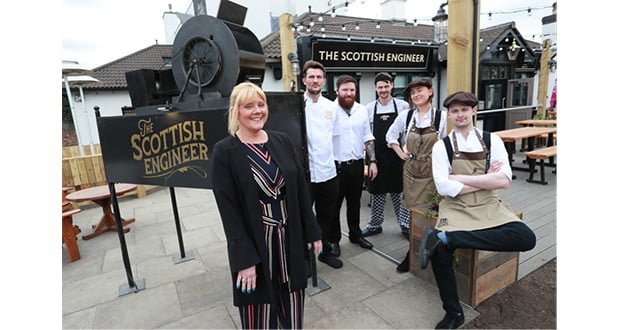 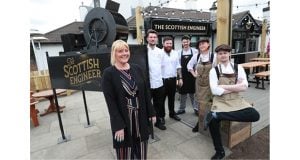 Edinburgh’s Telford Arms has been transformed into a landmark venue paying tribute to some of Scotland’s most famous engineers, thanks to a joint £500,000 investment by Belhaven Pub Partners and Ecosse Inns.

Belhaven, which is owned by Greene King, worked closely with the pub’s new operator

Andrena Smith-Bowes of Ecosse Inns on the design, which has seen the pub renamed The Scottish Engineer.

It marks the sixth pub Ecosse Inns has taken on with Pub Partners, with the Cameo in Edinburgh recently undergoing a similarly large-scale revamp last year that saw it renamed The Barologist.

The partnership has seen more than a million pounds invested across these two pubs in the past few months alone and the latest refurbishment has proved hugely popular in its first month of trading.

“We’ve made it into 172 seats inside and 132 seats outside and have redone the whole place,” says Andrena.

“It’s absolutely perfect timing for summer and we’ve been packed since opening. We took a pub that wasn’t trading too well and decided to turn it into a tribute to all the great engineers of Scotland, such as Alexander Graham Bell and John Logie Baird.

“We worked with great designers and have lots of engineering works on display – all our engineering displays are made from salvage materials.”

One of the biggest changes at the Scottish Engineer was overhauling the outside area to create a fantastic outside space, which had previously been underused.

“The pub was in need of real investment,” Andrena recalls. “We’ve completely re-landscaped the outside, put in raised decking, lights and a feature water wheel with steam that comes out. It’s all really beautiful, although I say it myself.”

The refurbished pub has also created around 30 extra jobs in the area, with the pub now employing a team of 36.

Andrena says: “It feels amazing to see my business growing and to me it’s all about the people. It’s about the staff we employ and the development within the team and also the customers. We’re so thrilled they’re joining us in paying tribute to the great engineers of Scotland by turning this pub into a beautiful, comfortable, family-friendly environment.”

“We’re always looking to support our pubs and are thrilled to have invested significantly in both the Scottish Engineer and the Barologist to help reinvent two brilliant pubs for pub-goers in Edinburgh.”