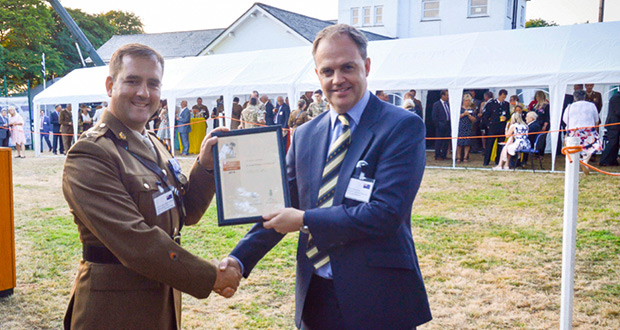 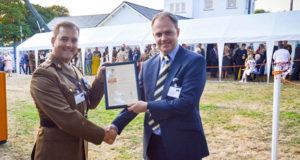 St Austell Brewery hasbeen presented with a special award for their support of the armed forces community at an official reception held by the 165 Port & Maritime Regiment (165 P&M Regt), The Royal Logistics Corps at their headquarters in Bodmin.

The presentation formed part of a special event that welcomed guests, both military and civilian, to the Bodmin Detachment of 232 (Cornwall) Port Squadron, one of the Regiment’s six Squadrons, on Wednesday 18th July 2018.

The Commanding Officer of 165 P&M Regt, Lieutenant Colonel (Lt Col) Craig Hampton-Stone, opened the evening with a welcome address to the guests, that included the Lord Lieutenant of Cornwall, Colonel Edward Bolitho OBE and the High Sherriff Mr Paul Young-Jamieson Esq.  Lt Col Hampton-Stone went on to highlight the role of the Regiment and the important relationship between the Military and the civilian community in the South West.

The presentation of a bronze Defence Employer Recognition Scheme award came as a result of St Austell’s commitment to support the armed forces community as exemplified through the recent signing of the Armed Forces Covenant at a joint event with Bath Rugby Football Club, as well as previous collaborations with military personnel on events such as the Epic Row charity gig challenge for wounded veterans in 2015.

Picking up the award on behalf of the Brewery, Director of External Relations Piers Thompson said, “As a company that has been operating in Cornwall for over five generations, we are proud to support our local military defence organisations and to show our support of armed forces personnel in particular. This was a very special evening that demonstrated the versatility of the Reserve units and it was fascinating to see the many different roles available for young people to get involved in.”

The military reception gave the opportunity for those attending to see the breadth of opportunities on offer to anyone looking for a life in the Army Reserve, as well as demonstrating the utility of some of the key equipment used by 165 Regiment in its operational role, namely a MEXEFlote powered raft and an all-terrain fork lift.