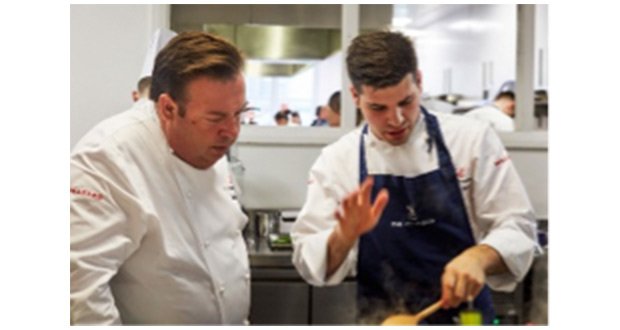 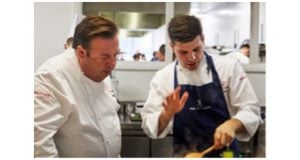 Spencer Metzger, of The Ritz, has won the 2019 Roux Scholarship. He beat five other finalists in a fiercely contested final held at Westminster Kingsway College, London, on Monday 1st April, where they were asked to prepare and serve Monkfish blanquette and langoustines with saffron basmati rice, garnished with seasonal vegetables and asparagus subrics.

The 26-year-old chef was battling it out against his colleague Ryan Baker from The Ritz, Olivia Catherine Burt from Claridge’s, Lewis Linley from Vacherin, Adam Harper from The Cavendish Hotel Baslow in Derbyshire, and Michael Cruickshank from Bohemia in Jersey.

Commenting on the 36th national final, Michel Roux Jr said: “It’s been a fantastic event as usual, but this year is more poignant with the passing of the first Roux Scholar, Andrew Fairlie. The feeling among the judges and the Roux family too is that this year had to be very special and we do have a very special Roux Scholar this year. The winning dish was exceptional, the monkfish was beautiful, the sauce was indulgent but not rich, creamy but not heavy. In fact, we were fighting over the last of it once we’d all had a tasting!”

Alain Roux added: “Not all the chefs utilised all the ingredients which was surprising. However, overall it was a very good standard, it really does get higher and higher every year. The winning dish was chosen by a unanimous decision among the judges, the fish was cooked perfectly.”

Peter Gilmore (Honorary President of Judges 2019) said: “Overall I was really impressed. The organisational skills showed they were well prepared. Nerves did get to some of them near the end but the winner was outstanding. Every element of the dish was right, the flavours and textures were spot on. There was very little to find any fault with.”

Winner Spencer said: “I was very happy with what I produced. I was a bit rushed and stressed at the end of the cooking time, but all the components were there and I was pleased with their flavours and the dish overall. I really don’t know where I’ll choose for my Stage, but I would want to go somewhere really different, maybe somewhere with a farm or something like that.”

The six chefs, all under 30 years old, had three hours to cook the Antonin Careme-inspired recipe in front of the judges. Three-Michelin starred chef Peter Gilmore, honorary president of the judges, led the panel alongside joint chairmen Alain and Michel Jr. They were joined by Brian Turner, James Martin, as well as previous winners Sat Bains (1999 scholar) and André Garrett (2002 scholar) and Clare Smyth.

The winner was announced at a glittering awards ceremony at The Mandarin Oriental Hyde Park, London, in front of an audience of top chefs and prestigious guests from the world of hospitality.

The winning chef, receives £6,000, and an invitation to cook and train under the supervision of a leading chef at a prestigious three star Michelin restaurant anywhere in the world for up to three months. This is in addition to an impressive list of prizes and culinary experiences provided courtesy of competition sponsors.