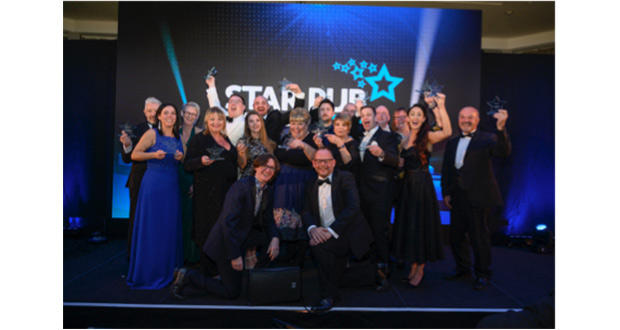 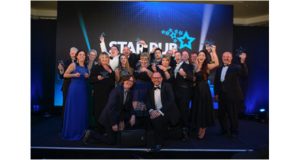 The achievements of top licensees from across the UK were celebrated at Star Pubs & Bars’ annual Star Awards last night. The awards were the biggest ever held by the company reflecting its enlarged estate of 2,700 pubs.

Representatives from 90 finalist pubs attended the gala ceremony, which was hosted by comedian Ed Byrne at The Belfry resort in Sutton Coldfield.

Sixteen awards were presented for areas ranging from innovation to food. Star Pubs & Bars’ focus on helping licensees drive sales across all drinks categories was marked with the launch of new awards for the best spirits, soft drinks and wine pubs. For the first time there was also an award for licensees on Star’s managed operator Just Add Talent agreement.

Kate Hayden and Paul Warriner scooped Star Pub of the Year and the Heart of the Community Awards for the Snow Goose at Farnborough. The Snow Goose’s outstanding success as a popular pub combined with its role as a vital hub of the community marked it out. Superb food and drink, events and customer service keep business growing year on year. The judges commended Hayden and Warriner’s constant innovation, commitment to the highest of standards and creation of an offer that appeals to all ages for a whole range of occasions.

Says Star Pubs & Bar managing director, Lawson Mountstevens: “This was a special year for the Star Awards as it was also the first anniversary of our acquisition of 1,900 pubs from Punch Taverns. It has been fantastic to have so many great licensees join Star Pubs & Bars this last year and to see so many of them represented at the Star Awards; the increased numbers took the level of competition up a notch. If the Star Awards is anything to go by, the standard of talent in the leased and tenanted sector is at an all time high. It was inspiring to have such superb operators, who are so passionate and positive about pubs, gathered together.”