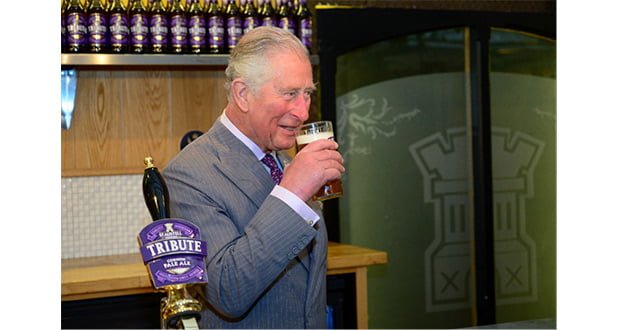 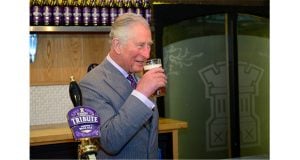 His Royal Highness The Duke of Cornwall visited St Austell Brewery earlier this month in celebration of Tribute Pale Ale’s 20th anniversary and in recognition of the company’s Queen’s Award for Enterprise. The brewery was awarded the honour last year, for sustainable development initiatives across its operations.

During the visit, St Austell Brewery’s Chief Executive, James Staughton and Head Brewer, Roger Ryman accompanied The Prince on a tour of the brewhouse, where he met members of the brewing team and local barley suppliers. His Royal Highness then met the family brewer’s long-standing employees, apprentices and licensees from across the company’s pub estate. He also spoke with members of the St Austell Bay Economic Forum (SABEF) – chaired by James Staughton – which has been awarded funding to rejuvenate the town, and surrounding areas, through inspiring horticultural and ceramic links.

The Prince was also introduced to representatives from ‘Pub is The Hub’, the not-for-profit organisation he founded to improve community services and activities. His Royal Highness officially launched the charity during his last visit to St Austell Brewery in 2001 when the Company celebrated its 150th Anniversary.

In recognition of Tribute’s 20th anniversary, and to mark the royal visit, The Prince was invited to unveil a special ceramic tankard designed by Emma Bridgewater CBE – a collaborator with the St Austell Bay Economic Forum. The tankard symbolises the reconnection between St Austell, the home of china clay in the UK and Emma Bridgewater’s home town, Stoke-on-Trent – a town celebrated worldwide for its potteries.

His Royal Highness was also shown how to pour the perfect pint of the brewer’s flagship beer, Tribute Pale Ale, by one of St Austell Brewery’s apprentices.

On his departure, The Prince was gifted a birch tree, a twin of which will be planted in the centre of St Austell to mark the royal visit.

James Staughton, Chief Executive, St Austell Brewery says: “We’re honoured that His Royal Highness was able to visit us in St Austell today to tour the brewery and meet our suppliers, employees who work across the business and the organisations we work alongside.

“It was a very special day and the perfect way to celebrate Tribute’s 20-year milestone and our Queen’s Award for Enterprise – a recognition that we were enormously proud to receive for our sustainable development.”