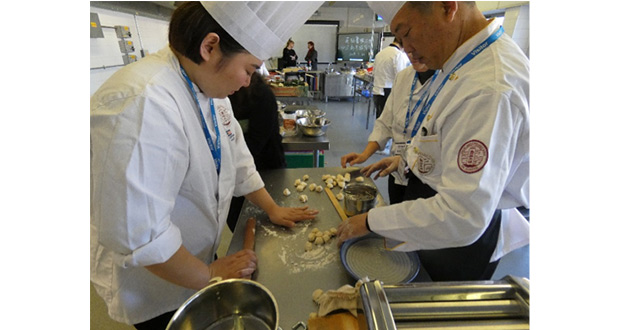 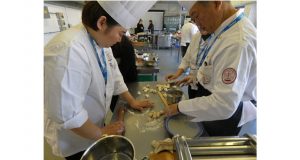 Four of the world’s best Chinese chefs flew 5,000 miles from Tianjin to the UK to serve up a Chinese New Year banquet for Prime Minister Theresa May.

The quartet of Master Chefs, all based at the Tianjin School of Cuisine (TSC), responded to a request from UK-based PAM Education to design and deliver a menu of Chinese delicacies, in partnership with Crawley College students on the UK’s only Chinese Culinary Arts (Lu Ban) Diploma, for the PM’s celebration.

The invite to cater for the event enabled TSC, PAM education and Crawley College, to use the opportunity as a workshop for the diploma course, which was only launched last October.

After two initial webinar sessions, the four Chinese Master Chefs flew to London and joined up with the student chefs at Crawley College two days before the Downing Street event, to fine tune the dishes ahead of the reception, which was attended by 150 guests including the Chinese Ambassador and celebrity chef Ching He Huang, on Friday 31 January.

The three student chefs plus Master Chefs Wu and Mu, were allowed access to the Downing Street kitchens to prepare and serve the menu.

Dr Xiaoli Dutton, founding partner of PAM Education, hailed the success of the entire operation and thanked the four chefs for their support and expertise, which put the Lu Ban initiative firmly in the spotlight.

She said: “When we were made aware of the invite from Downing Street, we took the initiative to ask for help from TSC master chef lecturers.

“They were fully supportive of the project, even with such short notice, and had no hesitation agreeing to plan a menu, work with the students and to deliver it at Downing Street.

“It was an incredible experience for all involved, especially the student chefs on the Diploma, who got first hand experience with the Master Chefs and then the opportunity to go to Downing Street. There was areal community feel to the entire experience.

“Without question, it proved just how successful collaborative learning between students, businesses and education providers can be.”