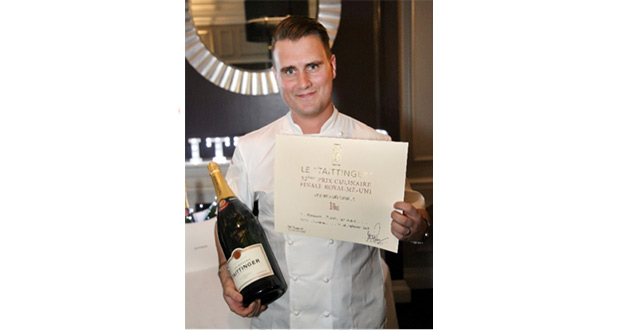 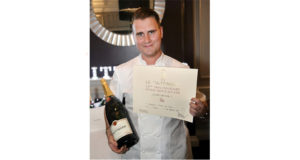 Competitors were invited to submit a recipe of classic cuisine and this year’s theme was “A Tribute to Paul Bocuse”.  The main dish was a whole Bresse chicken, with self-serve home-style stuffing and poulette sauce with a side of mushroom and chicken liver ravioli in a consommé.  Ingredients were chosen from a supplied list.  Participants were also asked to prepare a second dish based on a theme chosen by Michel Roux Jr.  This year it was “Tarte aux Pralines Roses”, a classic Lyonnais dessert with a pear garnish.

Kevin McKee, UK Director, Family Taittinger comments, “The competition was incredibly tough this year. All three finalists are fantastic chefs with incredible skills. Congratulations to Tom for an impressive win. I look forward to seeing him again at the Paris final”.

All three UK finalists – Tom Scade, The Ritz; Quentin Plateaux, The Langham London and Michael Dutnall from the RAF Club were given a trophy and a Jeroboam of Champagne Taittinger.  Tom received €2,400, a trophy and a place in the International Final which will be held in Paris on 19th November 2018. The winner of the International Final will receive €10,000; the runner up €4,800 and the 3rd place contestant, €2,500.

The competition, which was set up 52 years ago, is open to chefs between the ages of 24 and 39, with over five years’ experience. Often referred to as the ‘Everest of Gastronomy’, it demonstrates Champagne Taittinger’s commitment to the promotion of young, upcoming chefs.  Seven countries host national finals, including the UK final.