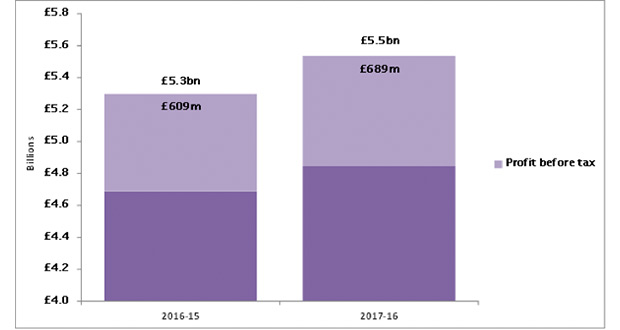 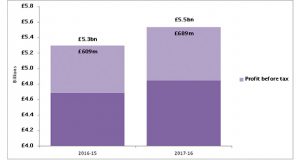 Profitability at the UK’s Top 100 hotel groups has risen 13% in the last year*, with pre-tax profits of £689 million, up from £609 million in the previous year, says Moore Stephens, the Top Ten accountancy firm.

Moore Stephens explains that hotels are benefiting from the continued drop in the value of sterling that has led to rising numbers of overseas tourists coming to the UK. 2017 set a record for inbound tourism to the UK, with 39.2 million visits, up 4.3% in a year.

Vincent Wood, Business Tax Partner at Moore Stephens, says: “2018 has already seen many big events that have helped to attract record numbers of tourists to the UK, including the Royal Wedding.

“Hotels are also being helped by a growing trend of more domestic breaks being taken in the UK and people choosing to go on ‘staycations’.

“Rising numbers of tourists are helping to reduce headwinds, but that won’t last forever. The lower value of sterling has already proved to be a mixed blessing for some. It saw input costs, such as food, beverages and other imported goods like linen, soar.”

Moore Stephens says that hotel profitability is, however, being impacted by higher running costs, with both business rates and minimum wage having increased in April.

Moore Stephens warns that the overall profits of the sector benefited from substantial asset sales by some hotel groups which flattened profits. The profitability of the sector as a whole has also been impacted by some hotels at the higher end of the market undergoing very expensive refurbishment programmes, some of which have over-run, including:

Moore Stephens says that many hotel groups are also now having to rely increasingly on more expensive temporary agency staff to fill vacancies. There is continued uncertainty over the status of EU nationals, many of whom work in the hospitality sector, in the UK with no Brexit deal finalised.

A recent survey revealed that over 10% of all workers in the UK hospitality sector are considering leaving the country because of Brexit.***

Vincent Wood continues: “UK hotels are well hedged from Brexit turbulence. A fall in sterling should pull in more tourists. A minority of UK hotels’ purchases are in foreign currencies.

“However, hotels should ensure they are on a sound financial footing should tourist numbers fall back from their current high levels over the long-term.

“It is also up to the Government to find ways, including changes to business rates, of continuing to help hotels – a key sector that employs hundreds of thousands of people.”

*Company accounts filed with Companies House as of September 30 2018