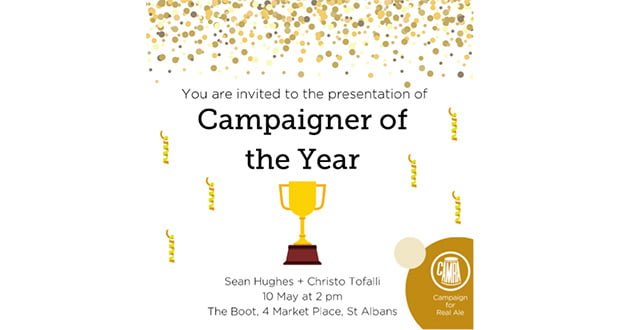 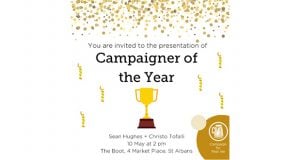 Two St Albans publicans will be recognised for their outstanding campaign to lower the business rates bill for pubs on Friday 10 May at 2pm.

The Campaigners of the Year Award will be presented at the Boot pub to owner Sean Hughes and his campaign colleague Christo Tofalli, who runs the Ye Olde Fighting Cocks.

The campaigners formed the Save St Albans Pubs Group in 2017 following a dramatic hike in the business rates bill for many pubs across the city – with one in five St Albans pubs facing a bill increase of 50%.

In an effort to stop pubs from closing down, the duo set up an online petition and secured the support of local MP Anne Main to help lobby for change. After encouraging both pub owners and pub-goers to write to the Government about the issue, they secured a detailed meeting with Treasury Officials and pushed for a special debate in Westminster Hall on the topic.

Since their campaign has taken off, pub-owners from across the UK have approached the pair for support in setting up a Save UK Pubs network, leading well-known beer writer Roger Protz to nominate them for the Campaigner award.

Roger Protz said: “Sean and Christo’s efforts to campaign on this important subject are truly inspirational. They’re shining examples of how you don’t need to be well-connected in the halls of Westminster or the head of a large campaign organisation to bring about change. I’m incredibly proud to be a St Albans resident and see my locals campaign on such an important national cause.”

Sean Hughes, landlord of the Boot said: “We are delighted to collect this award on behalf of all St Albans landlords who deserve recognition with this accolade. We set up the group to show the Government that this kind of taxation rise is not only unfair but is also destroying people’s businesses and leading to pub closures.

“The campaign has grown national and we will not stop until we have fair business rates for all pubs in the UK. We encourage the rest of the country to get involved and we strongly urge the Government to cap rates increases and launch an urgent review of business rates on pubs before it is too late – once a pub is gone, it is gone forever.”