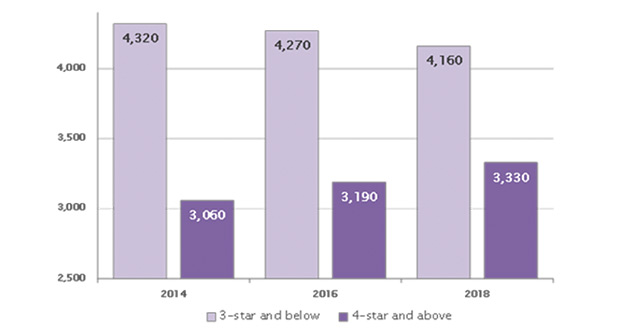 The number of luxury hotels (4 star and above) in the UK has risen by 140 in the last two years, while the number of 3 star and lower hotels fell by 110 over the same period*, says real estate law firm Boodle Hatfield. (see graph below).

Boodle Hatfield says that investors in the hotel sector are increasingly targeting more affluent tourists, driving a rise in the number of luxury hotels openings and upgrades in the UK. Investors from overseas, particularly the Middle East and Singapore, have been key in bringing new investment into the luxury hotel sector in recent years.

London landmark hotels the Savoy, the Four Seasons and the Corinthia are all owned at least in part by investors from the Gulf.

The UK’s tourism industry has benefitted from London’s reputation as a centre for wealthy individuals from around the world, as the country attracts a greater number of more affluent visitors, particularly from emerging economies. Tourists are forecast to spend a record £26.3 billion in the UK in 2018, up 7.1% on 2017.

Boodle Hatfield adds that there has been particular growth in the independent boutique hotel market, as affluent tourists seek more ‘authentic’ local experiences rather than the predictability of major hotel chains. These hotels are often conversions of a local landmark building, or give guests access to local culture, for example through their food offerings.

New luxury hotel openings in London in 2018 include:

Adam Chamberlain, Partner in the Real Estate team at Boodle Hatfield, comments: “There has been a very noticeable shift in investor focus towards the luxury end of the hotel market, as overseas ultra high net worth individuals seek to capitalise on London’s ability to attract affluent visitors.”

“London is one of the premier centres for wealth management globally, and that is increasingly reflected in the type of tourists the capital attracts. Investors have moved to meet demand from these visitors for luxury hotels.”

“Wealthy individuals, particularly from the Middle East, have for some time identified the UK luxury hotel sector as a major area of interest, as it blends the capital preservation of London real estate, a strong income stream, and the prestige that ownership of a landmark property offers.”